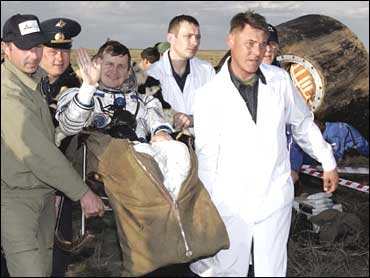 This report was written by CBS News correspondents Svetlana Berdnikova, Alexei Kuznetsov and Dave Grout in Moscow, with additional reporting from the Associated Press.

A Russian cosmonaut and an American astronaut returned to Earth on Saturday along with a U.S. billionaire whose paid voyage to the international space station ended with a landing on the Kazakh steppe.

The capsule carrying Mikhail Tyurin, Michael Lopez-Alegria and Dr. Charles Simonyi, a Hungarian-born software engineer and former Microsoft executive, touched down after a more than three-hour return trip from the orbiting station, making what one spokesman at Mission Control outside Moscow described as a "soft landing."

Dr. Simonyi looked ecstatic after rescuers helped him out of the capsule, which lay askew on the bleak grassland, and into a chair lined with fur for warmth. He smiled and grinned, shook a hand and spoke with the bustling support crew.

He then crunched enthusiastically into a green apple — a tradition after Russian space landings.

Dr. Simonyi, 58, the fifth person to pay for a trip to space, returned to Earth a day later than planned; flight controllers had decided to change the landing location because of flooding at the usual site just north of Arkalyk, Kazakhstan, requiring an extra day in orbit.

But the day wasn't spent just waiting around.

"I don't know how we would have done without (this extra day). Yesterday would have been incredibly busy!" remarked Dr. Simonyi in his Hungarian-accented English. Visitors to his Web site, www.charlesinspace.com, can see just how busy he was during his 14 days in orbit — blogging, answering some of the 5,000+ questions submitted by e-mail, assisting in experiments on plant growth, talking with school kids via ham radio connection, and leading video tours around the International Space Station. The site chronicles his entire mission in vivid detail.

But for all his online presence and media exposure, he is an unlikely personality for a space celebrity. "I might be the first nerd in space," he said during pre-launch training. He fondly remembers his student years programming a Soviet-made Ural II computer, and on his trip he took along a paper computer tape from 1964. After leaving Hungary for the U.S., he helped create two of Microsoft's most successful programs, Word and Excel.

And nerd or not, Dr. Simonyi is now the most visible spokesman for space, with millions of daily hits to his Web site. Present at the launch on April 7 were nearly 50 friends and family, including lifestyle maven Martha Stewart, who helped him prepare a gourmet meal as a gift to the other crew members aboard the ISS.

He had three main goals: to advance the idea of civilian space travel; to assist with scientific experiments in space; and, most importantly, to introduce kids to the science of space. "One of the main reasons is to involve kids and to communicate the experience of a spaceflight," he told CBS News.

Shortly before returning to Earth, Dr. Simonyi remarked that his conversations with school kids, facilitated by ham radio operators, were "probably the most successful part of this mission. It's really beyond anything that I would have imagined. The success of the Web site and the enthusiasm of the feedback. ... I'm really grateful to the ham (radio) community who facilitated these exchanges." The audio quality was also quite good. "We are the highest tower in town — 300 miles high. Our signal is crystal clear."

Regarding civilian space flight, Dr. Simonyi says it's a "good goal" and that it "complements what NASA is doing." But when space tourism officially began in 2001 with American multimillionaire Dennis Tito paying an estimated $20 million for his trip, NASA was not supportive of the idea, perhaps because the Russians had taken the lead. All five space tourists to date have gone up in the Russian Soyuz module.

"The dependability of the Soviet and Russian-made space hardware is well-known," Sergei Krikalyov, a Russian cosmonaut who flew on two earlier ISS missions himself, told CBS News in an interview. "The fact that people with big money entrust their lives to Russian hardware is only logical. They know that the U.S. Shuttle is not as reliable as the Soyuz. When they want to make their mark in space and look for maximum safety for their money — they come to us. If it was not the case, people like Simonyi would not be flying," Krikalyov added with pride.

"There are now more and more of them — educated people who dream about flying to space and can afford it," continued Krikalyov. "The U.S. government and NASA are very active in giving space exploration a huge plug. That is why space is very popular with Americans today. In fact, the current situation in the U.S. resembles that in the Soviet Union back in the 1960s. When Yuri Gagarin became the first man in space, almost every Soviet kid wanted to be like him."

But so far it's a predominantly American phenomenon. Nowadays, Russian millionaires who could afford an individual space flight don't appear interested. "They do not find flying to space worthwhile," said Krikalyov, lamenting the fact that wealthy Russians prefer to spend their money on villas, yachts and luxury items.

In contrast, American space tourists, Krikalyov points out, are "highly-educated professionals or scientists." And these professionals and scientists, while achieving their personal dreams of space travel, are also helping to finance the Russian space program, which gets no money from rich Russians.

In addition to making a substantial investment in space, Dr. Charles Simonyi has a few other accomplishments for the record. Among them: The first gourmet meal served aboard the ISS. Shared by the members of the 14th and 15th missions to the station, the six-course menu selected by Martha Stewart included roast quail, duck breast confit with capers, and rice pudding with candied fruit.

He also set a new record for the longest private space flight, spending 14 days in orbit.

But Dr. Simonyi himself was not at all excited about his record, hoping that soon paying passengers will be able to spend more time in space: "I do not think it is a record that will stand for long," he said shortly before the end of his flight.

In fact, according to the company Space Adventures, which organizes civilian trips to space, there are now 12 people on the waiting list. At the current rate, that adds up to $300 million in ticket sales.