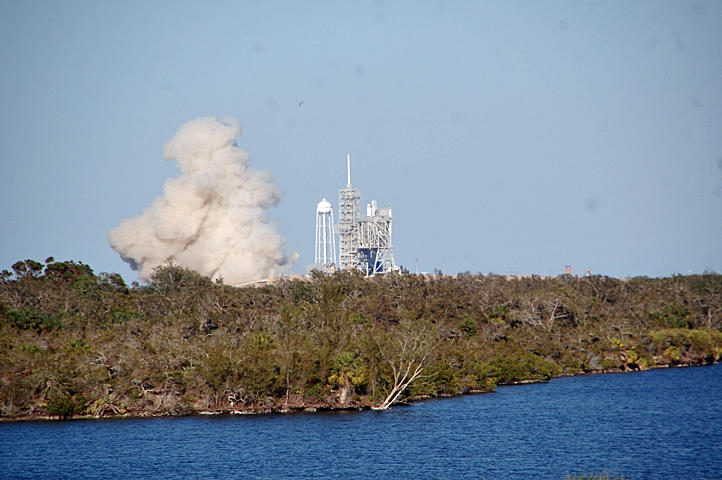 After working through the weekend, SpaceX test-fired a Falcon 9 rocket’s first-stage engines atop historic pad 39A at the Kennedy Space Center on Sunday, a critical milestone on the road to a Feb. 18 launch of a space station resupply mission.

The Falcon 9 -- mounted on a transporter-erector -- was moved from SpaceX’s processing hangar at the base of the former shuttle pad, up an incline to the top of the firing stand before dawn Friday. The rocket was then erected to the vertical launch position in preparation for the so-called “hot fire” test.

All SpaceX Falcon 9 rockets undergo such static firings before each launch to verify all ground and flight systems are ready for takeoff. In this case, the test also marked a crucial validation of extensive modifications needed to convert the repurposed launch complex for use by SpaceX.

The California rocket builder does not announce hot firings or provide details of pre-launch processing, but the rocket was easily seen on the pad and observers stood by all weekend awaiting signs of fueling and engine ignition.

Finally, about 4:10 p.m. ET Sunday, white vapor could be seen venting from the booster -- a normal sight during fueling operations -- and a few minutes later, at 4:30 p.m., a billowing cloud of dirty brown exhaust could be seen shooting away from the base of the pad as the rocket’s nine Merlin 1D engines ignited, throttled up and then shut down.

SpaceX confirmed the completion of the test firing in a tweet, saying “First static fire test of Falcon 9 at historic launch complex 39A completed in advance of Dragon’s upcoming mission to the @Space_Station.”

Assuming telemetry confirms a successful test and no major problems develop, SpaceX hopes to launch a Dragon cargo ship carrying more than 5,200 pounds of supplies and equipment to the International Space Station at 10:01 a.m. on Feb. 18. It will be the first launch from pad 39A since the orbiter Atlantis blasted off on the shuttle program’s final flight in July 2011.

During preparations for a hot-fire test Sept. 1 at the nearby Cape Canaveral Air Force Station, a Falcon 9 exploded in a huge fireball five minutes before engine ignition. The rocket and its $200 million satellite payload were destroyed and launch complex 40 was heavily damaged.

SpaceX ultimately concluded the failure was triggered by the rupture of a high-pressure helium bottle inside the liquid oxygen tank of the rocket’s second stage that was caused in part by ultra-low propellant temperature.

Procedures have since been modified to prevent a repeat of the failure and SpaceX successfully launched a Falcon 9 on Jan. 14 from Vandenberg Air Force Base, California. If all goes well, the company will follow the Falcon 9/Dragon flight with launch of an EchoStar communications satellite around March 1.