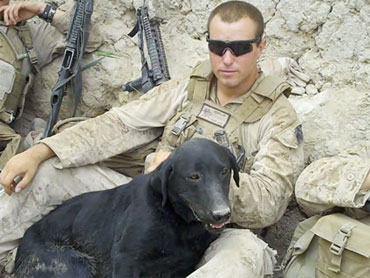 Lance Corporal Jordan Ridder never owned a dog when he was a boy. But he always liked dogs, and there were plenty around the neighborhood.

So when he joined the Marine Corps and they told him they were looking for dog handlers as part of a new program - a program designed to save Marines' lives - he applied, and was accepted.

The biggest threat to U.S. military personnel in Afghanistan - as in Iraq - is from IEDs, improvised explosive devices. To counter IEDs the military uses metal detectors, ground penetrating radar, electronic jamming signals, mine rollers attached to the front of vehicles and pretty much anything else they can think of that might be an effective counter-measure. Now comes a four-footed addition to the fight against IEDs - specially-trained dogs who can sniff out explosives under the ground before a Marine gets close to the danger zone.

Ridder and the 12 other dog handlers in Third Battalioni, First Marines (3/1) all got Labradors, traditionally used as hunting dogs to retrieve waterfowl. They have an excellent sense of smell and a strong work drive - even, as we discovered, in the 110 degree heat of southern Afghanistan.

The patrol started in the middle of the day with the sun right overhead. Ridder had already given his dog, TIgger, a sub-cutaneous i/v of regular saline solution, injected under the loose skin around his shoulders. Dogs can carry water under their skin and absorb it as they need it quite safely - it works almost like an internal camel back.

We worked our way through fields of wheat and poppy, and then after wading through a canal we walked down a road. Ridder sent Tigger out in front of everyone to see if his nose picked up any scent of explosives. The handlers can work their dogs three to four hundred yards away, so the dogs can cover a huge amount of ground as they dart back and forth.

The relationship between each dog and his or her handler becomes very close - when the weather gets cold many of the handlers have their dogs sleep next to them in their sleeping bags. In fact before he left California to come to Afghanistan Ridder had some push-back from his wife, Caitlin, who accused him of spending more time with his dog than with her. One can see Caitlin's point - some women might indeed feel a little left out if their husband is sleeping next to the dog all the time.

This patrol was uneventful, and no IEDs were found. Tigger had run many more miles than the human contingent, and whenever he got too hot he would just jump into one of the many canals or irrigation ditches to cool off. The biggest fear Ridder has for Tigger are the local Afghan dogs, many of whom are very fierce. They try to steer clear of local dogs.

Dogs are not as unpopular in Afghanistan as they are in Iraq (where dogs are all regarded as unclean) - but there is one local superstition which the Marines have to deal with, concerning black dogs. Like many of the Labradors, Tigger is jet black - many Afghans see black dogs as somehow linked to the devil, and do not want the dogs sniffing inside their compounds. Ridder keeps Tigger out of compounds unless they are specifically ordered to search a particular house.

3/1's dogs have already proved their worth. India company lost a dog last week - Tar - in an explosion that wounded his handler. Had the dog not alerted on the IED, more Marines might have been injured or even killed.

When we got back to the base, Tigger immediately found some shade to lie down in - his black coat absorbs heat and so he seeks out shade whenever and wherever he can. Even though no IED had been found, Ridder was upbeat - "we didn't miss any IEDs either," he said.

The patrols can be long and arduous in the heat, but the Marines are glad to have a dog with them - anything to increase their chances of finding an IED before it explodes. One mark of how high the dogs are valued - each dog is given a rank one degree higher than his or her handler, as a mark of respect for the dog. Lance Corporal Ridder effectively takes his orders from Corporal Tigger, complete with two chevrons on his collar.