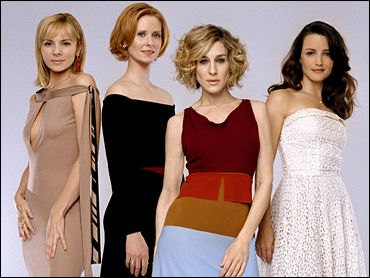 When Carrie asked Mr. Big if he'd like to come up to her apartment in the "Sex and the City" finale, he answered with a phrase that fans recognized from the very first episode.

His affirmative reply, which contained two extra unprintable syllables, was delivered with a wide grin.

When the rerun appears soon on TBS, the excision will be clean and precise.

If you're a longtime "Sex and the City" fan, the cut may appear ruinous, robbing the show of the spunk that made it special - or not. But if you've never seen it before, you'd never notice.

Those little instances will pop up hundreds of times when the Emmy-winning HBO series begins its run on TBS Tuesday. It's a landmark moment in television, the first time a pay cable series has been sold in syndication to a basic cable station and must be sanitized to meet stricter language and content standards.

TBS is promoting "five nights of great sex," and will air two of the series' best episodes each evening through Saturday. The network will begin showing all 94 episodes this summer, in order from the first to the last.

It's been a busy stretch for TBS' editors.

In many cases, HBO did the work for them. All along, producers filmed alternate scenes and recorded alternate dialogue, with an eye toward a future syndication sale and because HBO needed a tamer version of the show for some international markets, said Carolyn Strauss, president of HBO original programming.

Mere editing wouldn't always do. TV Guide, which compared some of the original episodes with the TBS versions, said most of Margaret Cho's dialogue was cut out during her guest appearance as a fashion designer.

TV Guide said it showed the TBS episodes to several fans of the show and someone who hadn't seen it before and "all agreed that there's still enough sizzle to keep them satisfied."

Yet critic David Bianculli of the New York Daily News wrote that something is clearly missing.

"The gist of each story line is there, but some of the edgiest observations and funniest jokes are gone, and Kim Cattrall's catty character, Samantha, has had her claws trimmed way back, if not removed entirely," Bianculli wrote.

The only people who can enjoy "Sex" on TBS "are those who don't subscribe to HBO, don't buy or rent the unedited versions on DVD, and won't know any better when they see the diluted versions," he wrote.

Koonin thinks the criticism is not only unfair, but inaccurate. "The only thing I can say is watch," he said.