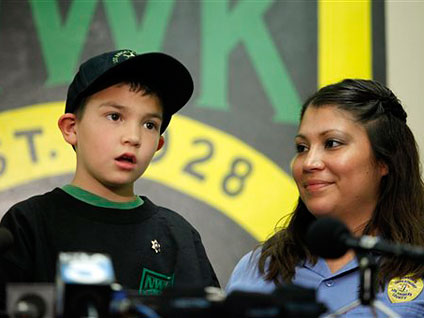 "Spider-Man 2" is one of the biggest films of 2004, taking in over $760 million worldwide. As The Early Show entertainment contributor and People magazine Senior Editor Jess Cagle notes, this isn't your everyday superhero film.

Returning leading man Tobey Maguire credits director Sam Raimi's mix of effects and emotion with making "Spider-Man 2" different. "I love working with Sam," Maguire says. "He has a great imagination and he wanted to raise the bar in terms of the action and the effects, and I think we did a much better job with that stuff. But I think more importantly, we wanted to have a good story"

In "Spider-Man 2," Maguire's mild-mannered Peter Parker must once again delicately juggle his dual lives as college student and a superhuman crime fighter.

"He comes into conflict with his choices in this movie," explains Maguire, "because his choices have caused him a lot of pain. And I think he does have personal satisfaction and feels somewhat fulfilled by what he does as Spider-man, but he doesn't get to enjoy his life in a simple way as Peter Parker."

Dunst reprises her role as Parker's long-suffering love, Mary Jane Watson. Dunst says making this film was a lot different than the first: "I've just grown up as a person since the last one, so I just felt a lot more confident. And I felt I could do a better job, and I just felt like more of a collaborator and just equally to all the guys. (In) the first one, (I was) like the girl on set; a little naïve."

The same, Cagle points out, could be said about her character.

"Mary Jane has also grown up a lot," Dunst says. "She is really the one driving hers and Peter's relationship and challenging it. And she is telling him how it is going to be, which I like."

Of course, there's more to the movie than romance. Maguire had to prepare for action, as well as acting. "It was easier for me than the first movie," he says, "just because, on the first movie, I had to do so much to learn who he was and how he saw the world and who these people were to him and what Spider-man means and the tone of the movie. …I still had to do preparation and still had to learn what this story is and what's going on, but it is just a part of me."

"Critics loved the movie as much as audiences," he says. "'Spider-Man 2,' believe it or not, is actually considered a contender in this year's Oscar for Best Picture."