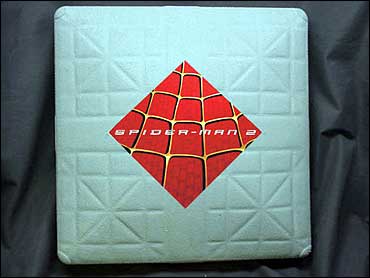 Spider-Man is coming to a base near you.

In the latest example of a sponsor's stamp on the sports world, ads for the movie "Spider-Man 2" will be placed atop bases at 15 major league ballparks during games from June 11-13, Major League Baseball announced Wednesday.

The promotion is part of baseball's pitch to appeal to younger fans - and make money along the way.

But the New York Yankees, playing at home that weekend, balked at the idea. The storied franchise said it would put ads on the bases only during batting practice, and then just for one game.

The promotion also angered baseball purists, who believe America's pastime is selling out.

"I guess it's inevitable, but it's sad," said Fay Vincent, a former baseball commissioner. "I'm old-fashioned. I'm a romanticist. I think the bases should be protected from this."

While commemorative logos have been on bases for special events such as the All-Star game or World Series, the Hall of Fame knew of no other commercial ads on bases, spokesman Jeff Idelson said.

The "Spider-Man" promotion has been in the works for more than a year and also will include ballpark events such as giving masks to fans, said Jacqueline Parkes, baseball's senior vice president for marketing and advertising. The ads, about 4 inches long, won't appear on home plates.

"This was a unique chance to combine what is a sort of a universally popular character and our broad fan base, including the youth market we're trying to reach out to," said Bob DuPuy, baseball's chief operating officer. "It doesn't impact the play or performance of the game."

"Spider-Man" opens June 30, and the weekend in early June was picked because it is during inter-league play, which draws higher attendance than usual.

Baseball will receive about $3.6 million in a deal negotiated by Major League Baseball Properties with Marvel Studios and Columbia Pictures, a division of Sony Inc., a high-ranking baseball executive said on condition of anonymity.

Ralph Nader, a presidential candidate and consumer advocate, harshly criticized the deal. He wrote Tuesday to baseball commissioner Bud Selig, denouncing the decision to have ads on uniforms during the season-opening series in March between the New York Yankees and Tampa Bay Devil Rays in Tokyo.

"It's gotten beyond grotesque," Nader said. "The fans have to revolt here. Otherwise, they'll be looking at advertisements between advertisements."

Vincent, brought into baseball by commissioner A. Bartlett Giamatti, wondered how his friend would have reacted. Giamatti, who died in 1989, rhapsodized about baseball is essays such as "The Green Fields of the Mind," in which he referred to second base as a "jagged rock" in the middle of the field.

"Wherever he is, Bart is spinning," Vincent said. "It's a good thing he's not around."