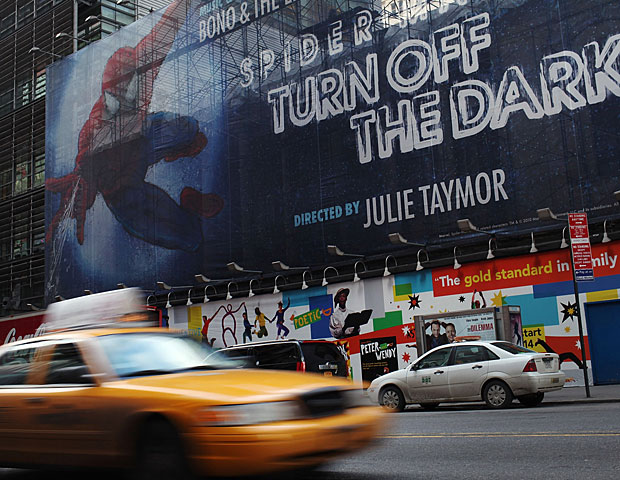 The $65 million Broadway musical. directed by award winning Julie Taymor with music by U2's Bono and the Edge, had another week of mishaps.

Still in previews with its latest opening set for March 15, "Spider-Man: Turn Off the Dark" was loudly booed last Monday night by professional critics impatient over the endless delays with the stunt-heavy show.

Breaking with tradition, reviewers weighed in while the show is still in previews, calling it "a shrill, insipid mess" (The Washington Post) and likely to "rank among the worst" musicals of all time (The New York Times).

Then on Thursday night, as if to prove the show still needs work before its official opening, another technical hiccup left actors playing the Green Goblin and Spider-Man hanging helplessly over the audience for several minutes.

VIDEO: "60 Minutes" Report on "Spider-Man: Turn Off The Dark"

Now comes word that the state Department of Labor issued two safety violations against the musical for a trio of accidents that injured performers last year.

A state official confirmed the news of the citations, first reported by The New York Times, to The Associated Press on condition of anonymity because he was not authorized to speak publicly.

No fines have been assessed in connection with the citations, but state labor officials will be conducting unannounced inspections.

Show spokesman Rick Miramontez told the AP in an e-mail Sunday: "The production is in full compliance of DOL guidelines and will continue to work with state officials to maintain the highest safety standards at all times."

A spokeswoman for the Actors' Equity Association, a labor union that represents more than 48,000 actors and stage managers, declined to comment Sunday.

The effect of all this bad news may be evident when box office figures are announced Monday. But, so far, the musical's woes haven't hurt its weekly revenues, and it's enjoying a mostly sold-out run since beginning performances in November.

But four delays in its official launch, a record-breaking preview period and the fact that full prices are being charged at the box office prompted critics from Variety to the New York Post to see the show and give their assessments last Monday night. They were not kind, lambasting the storytelling, the stunts and the music.

The show generated news stories after sending to the hospital several performers, including Spider-Man actor Christopher Tierney, who fell 35 feet during a performance when a safety harness failed and suffered a skull fracture and cracked vertebrae.

The list of others hurt includes Natalie Mendoza, a lead actress who dropped out after she suffered a concussion backstage, and earlier injuries to a few performers who suffered broken wrists and ankles as they were hurled at 40 mph over the orchestra seats.

After Tierney's tumble, the show was permitted to continue with its nearly 40 aerial stunts intact, but the Department of Labor added new safety measures. Among them: a requirement that a second person ensure the harnesses used by performers have been put on properly.

The state official who confirmed the two safety violations said one was related to Tierney's fall and the other involved two actors hurt while rehearsing a stunt with a stage out of position.

If further problems are found, the state inspectors may yank the variances that allow the show to dangle actors over the audience, the official said.

As for the delay in Thursday's show, producers blamed new safety protocols put in place after Tierney's accident.

"The aerial mechanisms have been outfitted with state-of-the-art safety technology that automatically stops if a performer is even a tiny bit off-course," Miramontez said. "While the ultimate goal is to minimize these stoppages, the production is not going to do so at the risk of the cast."