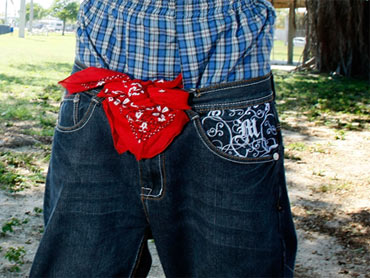 (CBS) CHICAGO - Spirit Airlines, the discount carrier that touts its "ultra low fares," kicked a passenger off a plane at O'Hare International Airport over the weekend after he tried to board wearing ultra-low pants.

As the man and a female companion boarded the Chicago-to-Orlando plane, a flight attendant asked the man to pull up his pants.

Spirit Airlines spokeswoman Misty Pinson tells CBS Chicago, "It was to the point where his entire bottom was hanging out. And that's not appropriate. We have a lot of customers on the plane, a lot of children on the plane."

Pinson says bare skin was not showing. But the man's underwear was.

"Our flight attendant asked him if he would kindly pull (his pants) up so that they were at a more appropriate level," Pinson said.

But the spokeswoman told CBS Chicago the sagging pants were not the reason the passenger was ultimately kicked off the flight.

"He became aggressive with the flight crew," Pinson said. "He threatened to smack the flight attendants."

As to what constitutes appropriate attire, Pinson says flight attendants are trained to use their own judgment.