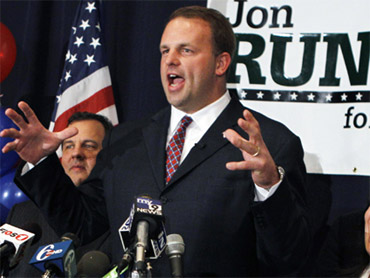 Pro wrestling's Linda McMahon was taken down in Connecticut and two former NBA centers went before voters on an Election Day when sports and politics crossed paths.

Chris Dudley, who built a long NBA career despite some of the game's most abysmal foul shooting, was still locked in a tight contest for governor in Oregon on Wednesday. The race was among the most prominent of the some two dozen across the country featuring sports figures.

Dudley, 6-foot-11 center from Yale who once played for the Portland Trail Blazers, drew on his NBA connections and among his supporters was Commissioner David Stern.

Shawn Bradley, a 7-foot-6 former BYU star who spent 12 years in the NBA, lost his bid for a spot in the Utah Legislature on Tuesday night. He was defeated by state Rep. Tim Cosgrove, a Democrat.

McMahon, the former CEO of World Wrestling Entertainment who presented herself as a shrewd businesswoman, was beaten for the U.S. Senate seat by Connecticut Attorney General Richard Blumenthal. Throughout the Republican primary and general election, McMahon was questioned about the WWE's role in steroids, the health of the wrestlers and the way wrestling portrays women.

McMahon and husband Vince McMahon turned what was once a marginal enterprise into a cash-rich empire. She besieged the state with ads and is believed to have spent at least $50 million of her own money on her campaign. Now, she's wary of a return to wrestling.

"You can't step out of WWE and expect to come back in because it moves forward and it's moving forward at a great pace," she said. "I wouldn't try to step back in there."

Heath Shuler, the former quarterback for the Washington Redskins and New Orleans Saints, was re-elected to Congress from North Carolina in an important race for Democrats. Shuler, part of the conservative Blue Dog coalition, held off Republican Jeff Miller in a campaign in which the football star tried to show where he broke with his party's leadership.

Republican Jon Runyan, a former Eagles lineman who spent 14 years in the NFL, defeated Democrat John Adler in a tight U.S. House race in New Jersey. Republican Jason Chaffetz, who once kicked 10 extra points in a game for BYU, was re-elected to Congress from Utah.

The U.S. Senate is losing its headline sports figure with the retirement of Hall of Fame pitcher Jim Bunning of Kentucky. Sen. Herb Kohl of Wisconsin, owner of the Milwaukee Bucks, was not up for election.

Kendrick Meek, once a defensive lineman on Florida A&M's conference championship team, was beaten decisively in the Senate race in Florida won by Marco Rubio. Meek, a Democrat, drew less than 20 percent of the vote.

Indiana's Baron Hill, a former basketball player at Furman, was caught in the sweeping Republican gains in the House. The Democrat was assailed by Republicans for backing the federal stimulus and health care bills. Norm Dicks, an ex-linebacker at the University of Washington, easily won re-election to the U.S. House from Washington.

A Virginia congressional race featured former Virginia football player Kenny Golden. The conservative Republican lost while running as an independent. In a U.S. House race in Ohio, former Arena Football League owner James Renacci was a winner. The Republican used to own the Columbus Destroyers.

Taking a swing at politics was former lumberjack champion Sean Duffy. The Republican won a spot in the U.S. House from Wisconsin and succeeds David Obey, the longtime Democrat who announced his retirement in May.

Republican Connie Mack, the great grandson of the legendary manager, easily won re-election to Congress from Florida. And Miami Dolphins rookie Nolan Carroll will have something to talk about at practice. The cornerback's mother is Jennifer Carroll, the running mate of Republican Rick Scott, who claimed the Florida governor's race when Democrat Alex Smith conceded Wednesday.

In the Tennessee Legislature, it was hardly a close call for former American League umpire Dale Ford. He ran unopposed.

Too Close To Call: