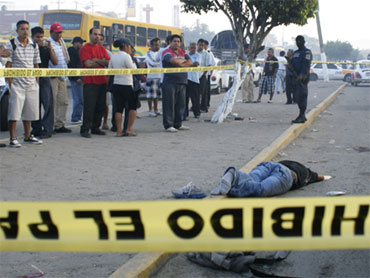 Thousands of college kids are pouring into Mexico for Spring Break. But the weekend was one of the deadliest in the country's recent history, as Americans were caught in the cross-fire of drug violence.

Three people with ties to the U.S. Consulate in Juarez, Mexico were gunned down in that violent border city over the weekend, reports CBS News correspondent Bill Whitaker.

Consulate employee Arthur Redelfs and his wife Leslie Enriques were killed in the drive-by shooting. Their baby survived the attack. A short time later the spouse of another consulate employee was murdered.

This, just two days after gunmen opened fire at a funeral in Juarez, killing six people, including a 2-month old baby and a 14-year-old girl.

To the south, along the Pacific in the popular tourist resort of Acapulco, an even more gruesome weekend. Early on Saturday, 13 people were killed, including five police officers. Four of the victims were beheaded. All, undoubtedly, the dirty work of Mexico's ruthless drug cartels.

"These individuals that are carrying out these beheadings are doing it as a signature and to send a message to their opponents," Brian Jenkins, a security expert with Rand Corp. tells CBS News. "That is a message that is intended to terrorize."

Mexico is in the grip of hyper-violent drug gangs battling on the streets for control of the smuggling routes to the illicit U.S. drug market, worth as much as $40 billion per year by some estimates. Not even president Felipe Calderon's declaration of war, with 45,000 troops sent to battle the cartels, has been able to stop the traffickers or the violence.

Still, despite the violence and U.S. government travel warnings, Mexico remains a popular Spring Break destination. Some 200,000 students from around the world descend on Cancun annually. MTV is hosting it's spring break extravaganza in Acapulco this week.

Beach parties and drug violence, a troubling mix in Acapulco this year.