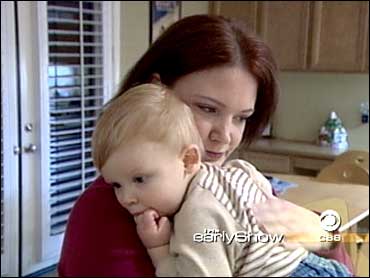 Sprint is taking heat amid accusations that it refused to help a California couple find an infant left in the family SUV that was stolen with the baby still in it.

reports
, 11-month-old Wade Cochran was in a car seat in the vehicle when it was snatched from the driveway of his Riverside County home.

"I was just so frantic to get our son back," Wade's mother, Stephanie Cochran, told Kauffman. "That's all I cared about. I was like, take whatever you want, just give me back my baby."

Wade's father, Jason Cochran, had put him in the family SUV, and gone back to the house to get Wade's three-year-old brother, Blake.

"I picked (Blake) up and walked back out the front door, and I looked out in the driveway, and the car was missing with Wade in it," Jason recalls.

Stephanie says she shrieked, " 'What do you mean, the car is gone?' So I came running out and looked."

The Cochrans knew their Sprint cell phone, with a Global Positioning System, was inside the SUV.

Jason says it was their "one ray of hope. We didn't have any other way of tracking the car, except for the phone."

So they called Sprint and asked the company to activate the GPS.

"Obviously," Stephanie says, "I'm frantic on the phone pleading for help. I gave them all the security questions they asked."

But, the Cochrans charge, Sprint officials refused to activate the GPS, saying they needed to be contacted by law enforcement first.

"Customers are not able to call and ask for GPS location," says Kathleen Dunleavy, a Sprint spokesperson. "You can imagine a dire situation where you have, let's say, a stalker or an abusive husband looking for someone, calling them with account information, password information, and getting the location of the person they may be stalking."

So, the sheriff's office called Sprint.

"Forms had to be filled out, and they had to be signed before they would release that information to us," says Riverside County Sheriff Bob Doyle. "Obviously, this was a real-time, fast moving situation and it could have been a life and death situation."

As it turned out, someone spotted the vehicle after an Amber alert was issued. Wade was still strapped in his car seat.

"When I got him back," Jason says, "it was the highest high of my entire life."

"Everybody was very lucky in this situation," Doyle observed.

In the meantime, Kauffman notes, the Cochrans have switched cell phone companies.

And county authorities are now working to change the law, so they can immediately access GPS information without all the red tape.