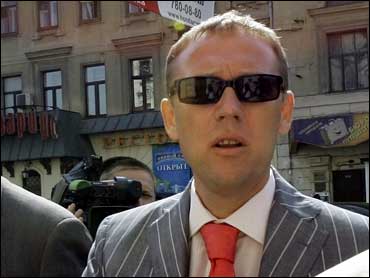 The sole suspect in the radiation poisoning death of Kremlin foe Alexander Litvinenko has been nominated to run for parliament on a pro-Kremlin ultranationalist party's ticket, according to a Russian news agency report Sunday citing the party's leader.

Liberal Democratic Party leader Vladimir Zhirinovsky said that Andrei Lugovoi, a former KGB officer who Britain has identified as the main suspect in last year's murder in London of Alexander Litvinenko, would be No. 2 on the party's list in December's parliamentary elections, the Interfax news agency reported.

Zhirinovsky, a flamboyant politician who heeds the Kremlin's orders, dismissed British charges against Lugovoi as "an attempt to organize provocations against our citizens," Interfax said.

Lugovoi confirmed his intention to run for parliament on Zhirinovsky's party ticket and said he would give more detailed comment after the party's congress Monday, Russian news agencies reported.

Litvinenko, a former KGB officer with asylum in Britain died Nov. 23 in a London hospital after ingesting radioactive polonium-210. In a deathbed statement, he accused Putin of being behind his killing - the charges the Kremlin has fiercely denied.

Litvinenko said he first felt ill Nov. 1, the day he met with Lugovoi and two other Russians at a London hotel bar.

Lugovoi's lawyer, Tatiana Stukalova, said Sunday that he had filed a lawsuit against the business daily Kommersant over its report during the summer which referred to Litvinenko as Lugovoi's "victim." Lugovoi said that the report cast him as criminal and sought 20 million rubles (about $800,000) in damages, news reports said.

Kommersant editor Dmitry Vasilyev said on Ekho Moskvy radio that the newspaper was ready to retract the line Lugovoi was referring to, but called the amount of damages Lugovoi was seeking excessive.

Russia has rejected Britain's request for Lugovoi's extradition, saying its constitution forbids it. Tensions over the Litvinenko case have badly hurt the bilateral ties, and the two nations recently have announced tit-for tat diplomat expulsions.