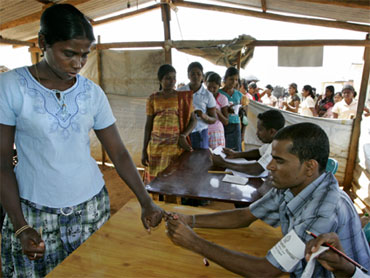 Sri Lankans crowded polling stations Tuesday to choose between two Sinhalese war heroes — the president and his former army chief — in an election that could be decided by minority Tamils, who suffered most from the government offensive to end the civil conflict.

While voting among the Sinhalese majority appeared strong, turnout was sparse in some northern Tamil areas, their traditional bastions where the most intense fighting drove hundreds of thousands from their homes. Early morning explosions in the northern city of Jaffna were expected to further suppress turnout.

But there were no reports of major violence by the time polls closed in the afternoon. The top opposition candidate, however, was not allowed to cast a ballot because his name was not on voter registration lists.

Though it has been just eight months since President Mahinda Rajapaksa and retired Gen. Sarath Fonseka declared victory in the quarter-century war against the Tamil Tiger rebels, many voters were more focused on the stagnant economy than the newfound peace.

"Life is difficult, the cost of living is high. We need a change of government to stop corruption," said Pathirannnehelage Priyalal, a 40-year-old businessman in the town of Gampaha, north of Colombo, who said he voted for Fonseka. "There has been no relief even after the war and if this government remains, even finding food will be difficult."

Rajapaksa, however, still retains strong support for his war victory and rights groups accuse him of misusing state resource — including the state media — to bolster his campaign.

"Mahinda must win," Priyanthi Ovitigala, 42, said minutes before voting in Gampaha. "This freedom is very important more than anything else. No previous political leader could win the war."

Though there have been no reliable polls, both candidates appear to command strong Sinhalese followings, and the votes of the Tamils

who suffered most from the government offensive against the rebels — may prove decisive. Twenty other minor candidates are also running.

Tamil parties joined a diverse array of opposition parties in supporting Fonseka, but the lack of participation by minority voters in the areas where war has left tens of thousands homeless and living in camps could scupper the effort to unseat Rajapaksa.

They are also an indication of the difficulties the next president will face in securing peace with a minority that feels so marginalized by the state it chooses not to participate in elections.

Nevertheless, some Tamil voters from the Manik Farm camp in the north, where civilians displaced from the war zone are living, walked about a half-mile (a kilometer) to polling centers set up at a nearby village. In a separate area in Vavuniya, authorities bused in former rebel fighters from rehabilitation camps to vote, but they mainly chatted with long-lost comrades and some did not even bother voting.

The opposition said it feared the government would try to steal the election, and in a sign of possible irregularities, Fonseka said his own name didn't appear on the voter registration list. The electoral commission said that would not effect his candidacy.

Both Rajapaksa and Fonseka, both considered heroes by the country's Sinhalese majority, have promised to bring development to the country and lead its rebuilding effort from the war. But neither has presented a detailed plan to resolve the underlying ethnic tensions — and Tamil complaints of marginalization — that sparked the rebels' separatist insurgency in the first place.

Overall turnout was around 70 percent, but only between 15 and 20 percent of registered voters turned up at the polls in the north, where the Tamils worst affected by the war lived. Turnout may have been further suppressed by an early morning explosion in the northern city of Jaffna that election monitors said was a grenade attack.

Election monitor Paikiyasothy Saravanamuttu said one blast was a grenade attack on the office of a ruling party organizer.

However, an opposition Tamil lawmaker accused the military of firing artillery shells into the sea to dissuade voting among Tamils, who were expected to lean toward Fonseka.

"I think the government wants to minimize the voting," lawmaker Suresh Premachandran said.

The leaflets, signed by a previously unknown group calling itself Tamil Patriots, said the group does not agree with the decision of Tamil political leaders to back Fonseka.

"Our stand has always been that the Tamil people need not vote in an election to choose a president for the Sinhalese state. Our people should not permit the sacrifices of our warriors to go to waste," the group said in the letter.

During the last presidential election in 2005, won by Rajapaksa, the Tamil Tigers enforced a boycott among ethnic Tamils at gunpoint. This year, however, Tamils are expected to vote — though not in huge numbers.

In the multiethnic eastern town of Batticaloa, Tamil voters enthusiastically lined up at polling stations, unlike in earlier elections when they feared violence, according to a resident.

Rajapaksa has campaigned on his war record and his promises to bring development to the nation and branded Fonseka a potential military dictator.

Fonseka, who also pledges an economic renaissance, accused Rajapaksa of entrenched corruption and promised to trim the powers of the presidency and empower parliament if elected.

First results are not expected until Wednesday.