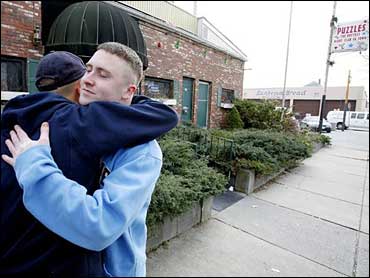 St. John's game against No. 23 Massachusetts was going to settle the question about the Red Storm's inside game.

The answer was pretty impressive and it meant a 73-69 victory Wednesday night in the second round of the Preseason NIT.

Tyrone Grant had career-highs of 20 points and 17 rebounds to lead the Red Storm (2-0) into next week's semifinals at Madison Square Garden.

"We came out to win this game," Grant said. "The only difference between us and them was that they had No. 23 in front of UMass and we didn't have a number."

That could change if St. John's plays the way it did inside, going to the free throw line 33 more times than the Minutemen (1-1), outrebounding them 49-37 and holding the powerful inside combination of Lari Ketner and Ajmal Basit to 16 points on 6-of-19 shooting.

"The first thing I want to talk about is the job Ron Artest did on Ketner in the second half," St. John's coach Mike Jarvis said, referring to his 6-foot-7 sophomore forward who gave away three inches and 50 pounds in the matchup. "We couldn't afford to lose Tyrone the way he was playing and I knew Ron was smart and strong enough to play him."

The Red Storm, who crushed North Carolina-Asheville 105-50 in the opening round, will have one game -- against Columbia -- before next Wednesday's semifinals against an opponent from the four-team bracket that started their first-round play Wednesday night.

"I am very excited about playing in Madison Square Garden," said Jarvis, who is in his first year at St. John's, which plays a portion of its home schedule there. "But we have to remember that Columbia is our next anmost important game. I won't even think yet about the NIT."

The Minutemen were expected to be able to use their size advantage inside against St. John's. But Grant, a 6-foot-7 senior forward, and the 6-6 Lavor Postell, a starter who has been moved to the sixth man role by Jarvis, came up big.

Massachusetts, which trailed 35-27 at halftime, was within 41-37 with 13:38 left on a move down low by Ketner, who struggled all night with his shooting as St. John's played tough defense inside.

Grant, whose previous best was 17 points as a sophomore and 15 rebounds twice, and Postell scored all the points in a 5-0 run that made it 46-37 with 10:40 left. Grant's free throw that capped the run came when he was fouled by Ketner and he picked up his fourth foul 16 seconds later.

St. John's took control for good when Basit, a 6-9 junior forward, picked up his fifth foul when he hit Grant as he made a nice move with his left hand and made the shot. Massachusetts coach Bruiser Flint argued the call and was given a technical. Grant made the free throw to complete the three-point play and the two for the technical and St. John's had a 55-41 lead with 7:56 to play.

"We had opportunities and couldn't throw it in the ocean and they took advantage," Flint said. "We got frustrated early. Tyrone Grant had 10 rebounds on second and third shots. We didn't go get it."

Massachusetts made the game close by ending the game with a 14-7 run that included three 3-pointers by Rafael Cruz in the final 1:13, but the Red Storm went 7-for-8 from the foul line in that span.

Postell and Bootsy Thornton each had 13 points for St. John's, while freshman point guard Erick Barkley had 12.

Mike Babul and Monty Mack each had 15 points for the Minutemen, who beat Niagara 87-74 in the opening round.

Ketner, considered one of the top players in the Atlantic 10, finished with 13 points on 5-of-14 shooting.

"Ketner was just missing, then he got timid," Flint said. "His first six shots were from two, three feet from the basket. You can't put it in for him. They're a tough team to match up with and they scrap and scrape and that shows in the 46 foul shots."

St. John's improved to 7-0 all-time against Massachusetts, but the previous six games were all played from 1963 to 1968.