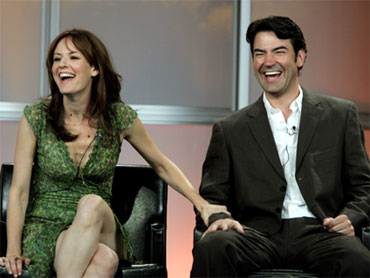 A Palestinian attacker stabbed a man to death and wounded another in Tel Aviv on Tuesday in what police called the first terror attack in an Israeli city since militant groups declared a truce June 29.

Palestinian leaders, meanwhile, said they settled a rift that jeopardized peace efforts.
Abbas had threatened to resign last week, but he met with Arafat and officials say they settled their differences, reports CBS News Correspondent Robert Berger. However, the power struggle is likely to continue. Arafat wants a harder line in dealing with Israel; Abbas wants to pursue his strategy of non-violence.

The Tel Aviv attack came hours after the Arafat-Abbas meeting on the trendy beachfront. After the meeting but before the attack, Abbas pledged to enforce the cease-fire agreed to by the three main Palestinian militant groups.

A Palestinian armed with a knife tried to enter a restaurant on the trendy Tel Aviv beachfront, but was stopped by an Israeli security guard, reports Berger. After attacker stabbed the guard, he stabbed another person walking on the street and killed him.

Customers in the restaurant threw chairs at him, and the attacker began to flee along the seaside promenade, with the guard and owner in pursuit. The attacker stabbed a man on the promenade before a passer-by shot the Palestinian in the legs, Kleiman said.

He was questioned by police, who identified him as a 23-year-old member of the Al Aqsa Martyrs' brigade, a militia linked to Yasser Arafat's Fatah movement.

A statement posted on the Al Aqsa Martyrs' Brigades Web site said one of the group's members had carried out the attack. The statement vowed more "martyrdom operations until we uproot the occupation from our land ... This is our retaliation for the dirty occupation and the cowardly crimes against our fighters."

The truce includes Yasser Arafat's Fatah, of which al Aqsa is an offshoot. Al Aqsa, however, is loosely organized and some branches say they are not compelled to abide by the cease-fire. The Jenin branch of the group, for example, violated the truce just one day after it went into force, killing a Bulgarian laborer mistaken for an Israeli.

Palestinian Information Minister Nabil Amr said Palestinian authorities "will continue our efforts to contain these acts and to put an end to these acts." He said the truce would hold.

Israeli and Palestinian analysts agree that Arafat has the upper hand. While the U.S. backs Abbas, Arafat is much more popular on the Palestinian street.

The United States and Israel hope Abbas can lead the Palestinians in peace efforts that would end 33 months of violence and create a Palestinian state in the West Bank and Gaza by 2005 according to the internationally sponsored "road map" plan.

In London, British officials rebuffed visiting Israeli Prime Minister Ariel Sharon's request that they join the boycott of Arafat, who is accused by Israel and the United States of fomenting terrorism.

British Foreign Secretary Jack Straw said his country would continue dealing with Arafat, who was elected the leader of the Palestinian Authority in 1996.

In a reflection of the power struggle within the Palestinian Authority, Palestinian legislator Saeb Erekat said Arafat and Abbas agreed that "the Palestinian leadership is in charge of peace talks with Israel." That leadership, including PLO officials, is controlled by Arafat, and the agreement meant that Abbas recognized that he is not a free agent in dealing with Israel. Erekat, who helped organize the meeting, said Abbas had told Arafat to "back me or sack me. ... And since President Arafat was the one who chose Abu Mazen (Abbas) in the first place, he told him that he will give him and his government all the support."

Tensions boiled over last week when Arafat's allies criticized Abbas' handing of contacts with the Israelis, especially over demands that Israel release an estimated 7,000 Palestinian prisoners. Israel has offered to free only a few hundred, and critics accused Abbas of being too soft.

Abbas has been Arafat's deputy in the PLO for many years, but their relationship has been rocky. Abbas has resigned a number of times, but always returned to his post.

On Tuesday, Egyptian intelligence chief Omar Suleiman met Abbas and Arafat at Arafat's Ramallah compound. Egyptian security officials have played a key mediating role in obtaining the truce from Palestinian militant groups, and Erekat said the meeting would focus on the next steps in the road map.