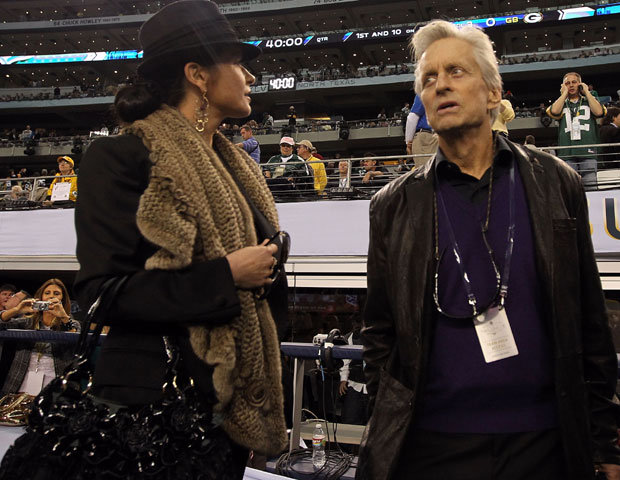 DALLAS (CBS/AP) Celebrities took over Dallas this weekend, turning up not only at the Big Game at Cowboys Stadium, but at parties all over town.

The football field wasn't the only place fans could get a glimpse of stars at the Super Bowl - there were plenty of famous faces watching the game as well.

Cameron Diaz, Jennifer Aniston, John Travolta, Michael Douglas and Catherine Zeta-Jones were among the celebrities who streamed into Cowboys Stadium Sunday afternoon to watch the matchup between the Pittsburgh Steelers and the Green Bay Packers.

As Lea Michele of "Glee" sang "America the Beautiful," the gigantic screen in the middle of the stadium flashed to former President George W. Bush and former first lady Laura Bush, who made their home in Dallas after he left office.

As the game began, New York Yankee Alex Rodriguez and actress Cameron Diaz were also shown on screen. Ron Howard was spotted by the cameras at the game, and NASCAR driver Kevin Harvick was also there.

Sports Illustrated model Brooklyn Decker, who is married to tennis star Andy Roddick and stars in the upcoming film "Just Go With It" with Sandler and Aniston, said she was excited to be there.

"I'm a big football fan," said Decker, who added that her husband had taken his father to the game.

Magazines like Sports Illustrated and Maxim are threw elaborate star-studded affairs in the days leading up to the NFL championship game.

Celebrities arrived at the stadium under clear blue skies and a bright sun. North Texas endured an unusual week of ice and snow leading up to the game before the sun finally came out and temperatures went up for the weekend.

Ron Perlman, star of the television show "Sons of Anarchy," marveled at the difference in the weather between Sunday and his arrival earlier in the week, which featured a treacherous trip from the airport.