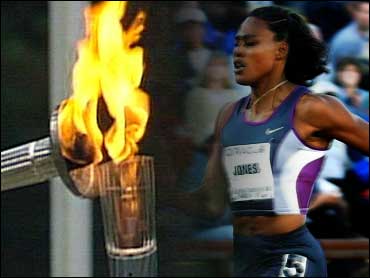 Star athletes and famous actors will be among the torch bearers when the Olympic flame for Athens makes its unprecedented round-the-world journey, organizers said Wednesday.

Australia's 400-meter Olympic champion Cathy Freeman will carry the torch at the start of the relay in Sydney on June 4.

Later in Brazil — in the flame's first appearance in South America — the torch will be carried by soccer stars such as Pelé, Ronaldo and Zico.

In the United States, the torch will be carried by NBA legend Magic Johnson, Olympic gold medalists Gail Devers, Michael Johnson, Carl Lewis and Edwin Moses, as well as by actress Jennifer Aniston, who is of Greek descent.

The flame was lit in Ancient Olympia on March 25 and was brought to Athens' marble stadium, where the first modern Olympics were held in 1896. It will burn at the stadium until June 4, when it starts a 46,800-mile global journey across six continents, 27 countries and 33 cities with some 11,000 runners.

The 78-day itinerary includes groundbreaking African stops in Cairo, Egypt and Cape Town, South Africa, and a first South American appearance in Rio de Janeiro. Other stops include the war-divided island of Cyprus and Istanbul, Turkey, in the latest overture by Greece to heal traditional rivalries.

All past Summer Olympic cities are on the list — and the 2008 host Beijing. In the United States, it includes Los Angeles, St. Louis and Atlanta. The flame also is scheduled to pass through New York, where many expect some commemoration linked to Ground Zero.

The torch relay returns to Greece on July 9 for the second half of its domestic relay. Hollywood star Angelina Jolie will carry the Olympic torch during one of the final stages of the relay. Jolie will run with the torch the day before the start of the Aug. 13-29 Olympics.