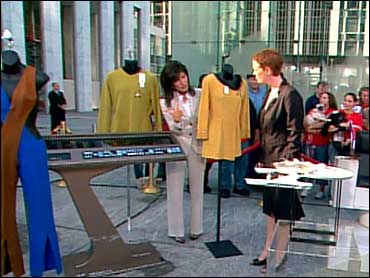 Next month, Christie's auction house will be the final frontier for a large selection of items from the Star Trek TV shows and movies.

Christie's says it's the first "official" auction of its kind, with more than 1,000 lots involved, including props and costumes actually used in the TV shows and films. Also up for grabs: detailed models of the Enterprise and various alien ships and space stations!

Helen Bailey, head of entertainment memorabilia for Christie's, visited The Early Show Monday to give viewers an advance look at some of the items being put up for bid.

To watch the segment, .

For complete details on the auction and items going on the block, click here.

For a guide to bidding and registration, click here.