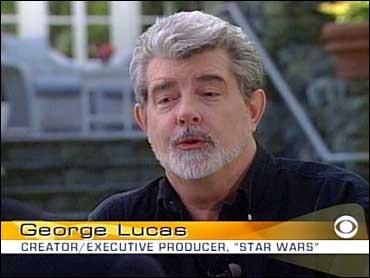 Two years ago, the original "Star Wars" trilogy was released as a DVD box set -- something hungry fans had waited years for. Now, trilogy creator George Lucas and his studio are releasing the same three movies on DVD -- again.

The much anticipated trilogy, "Star Wars," "The Empire Strikes Back," and "Return of the Jedi, was introduced on DVD after the movies were digitally restored and re-mastered. They included scenes not in the originals, like one with Jaba the Hut in the first film, in which he did not originally appear. Things like that bothered legions of "Star Wars" fanatics.

"Fans of this film want it and they want it as they first saw it and they remembered when they were a kid and it won them over and it was magical," Dalton Ross, a self-professed Star Wars geek and senior editor at Entertainment Weekly, told The Early Show's entertainment contributor and People magazine Editor at Large, Jess Cagle.

Now, Twentieth Century Fox is releasing new DVDs. Each two-disc set comes with the digitally-enhanced versions, but more importantly, the movies as they were seen in theaters decades ago.

The original trilogy has already been in theaters, released on videotape and put back into theaters. At the 1997 re-release, actor Mark Hamill, who played Luke Skywalker talked about their longevity.

"It's got everything a good fairy-tale would have," he said then, "a pirate, princess, a wizard, a farm boy -- and some lovable robots. It's amazed me that people have kept it alive in their hearts and minds."

But are these latest discs really that different, or are they just taking consumers for a ride, Cagle wondered.

"For fans, this is very bittersweet," Ross said. "They're very happy to have the original version finally out on DVD, but the question they're asking themselves is. 'Why am I having to pay for this again; why didn't they do this two years ago?' "

Like it or not, this is probably all you can expect if you're clamoring for new "Star Wars" material. Lucas has vowed not to make any new movies for the series.

"I said it might be amusing to come back with Harrison and Carrie when they're 70-years old and make a movie, but I forgot that I'd be 70-years-old, too," Lucas said, referring to people who ask him about more sequels.

Lucas has talked about doing 3D version of all these films, for theaters. They would be released one-a-year. There is also talk of a 2007 "ultimate set" with all six films and new bonus material. There have also been rumors of a TV series, books, cartoons, and video games.