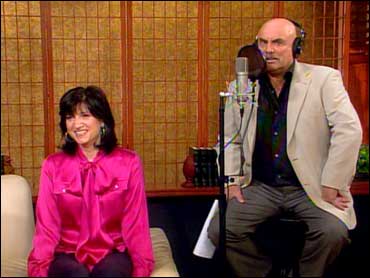 Testimonials are a tried-and-true method of advertising, but the latest commercials from auto insurer Geico take the testimonial and give it a twist that people can't stop talking about it.

The premise is simple but hilarious. A real person who used Geico appears on a commercial along side a celebrity, who usually has a quirky personality. The real-life client delivers his or her story devoid of expression in a deadpan style while the celebrity's interpretation is over the top.

"The testimonial is usually so deadly dull," Barbara Lippert, a columnist for Adweek magazine, told The Early Show co-anchor Harry Smith. "If it's the words of the celebrity, celebrity, you think he's getting paid. This marriage is so hilarious because they have to use the words of the consumer for legal reasons. And then if you have a celebrity interpreting what you said in an entertaining way, wherever you went in the world you would be much more successful."

In one commercial a woman named Linda talks about how she was rear ended by a Geico customer. Next to her, singer Burt Bacharach is lightly playing the piano. He sings:
"I was hit in the rear."

"I was so impressed with how they handled my claim I switched," Linda said on the commercial.

"I hope I never get in the rear again," Bacharach sings.

"He is deeply interpreting that," Lippert said. "The guy at the Martin agency told me he did a little thing over the phone with the lyrics and he said, 'I like this. I don't know if I want to give this to you.' "

Another favorite is the commercial featuring Little Richard and a woman who hit a deer on Thanksgiving night.

"I called Geico expecting a recording but someone was there to help me," she said on the commercial.

"Help me! Somebody help me!" Little Richard screamed next to her.

"Geico got my claim in the works right away and I was able to enjoy my Thanksgiving," she said.

Don LaFontaine is the voice behind more than 5,000 movie trailers and he also appears on one of the Geico commercials.

"I was amazed, but after the reaction to those spots — nothing much amazes me any more," LaFontaine said.

Lippert said that Geico is famous for running humorous mini-campaigns like the commercials featuring the gecko with a British accent or the cavemen who feel they are victims of prejudice.

"They keep refreshing it, so you never get sick of it and they have a huge advertising budget because Warren Buffet bought the company in 1996. It was this obscure little place for government employees with the good driving records, so they invented the gecko because nobody could pronounce Geico," she said. "They did hundreds of gecko commercial and he became the most loved icon next to Juan Valdez."