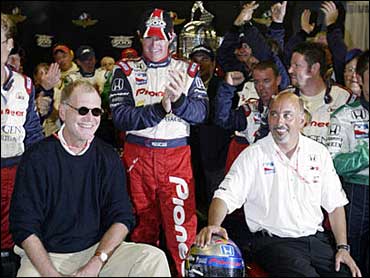 Some of the celebrities at the Indianapolis 500 had local roots. Letterman, former NBC "Today" host Jane Pauley and Rupert Boneham of "Survivor" fame are Indiana natives.

Rice, his foot on the pedal, kept one eye on the fuel gauge, one on the darkening sky and won a rain-soaked Indianapolis 500.

With storm clouds closing fast, the 28-year-old Rice grabbed the lead in a final flurry of pit stops. It was the first victory of Rice's career. Not bad considering the guy was filling in for the team's regular driver, 1999 Indy champion Kenny Brack, who is still recovering from a devastating crash last year.

That Rice won for Rahal Letterman Racing — Bobby Rahal renamed the team two weeks ago to reflect the contributions of his famous co-owner — will undoubtedly provide plenty of fodder for Top 10 lists and other "Late Show" antics.

Notoriously private and usually camera-shy when he's away from his own show, Letterman let his guard down as Rice coasted across the finish line in a race that was shortened by 50 miles when scary thunderstorms swept over the speedway.

"It's indescribable," Letterman said. "I don't think the rain made any difference. We could have gone the full 200 laps. My God! What a job Buddy did. It's a thrill to be a part of this."