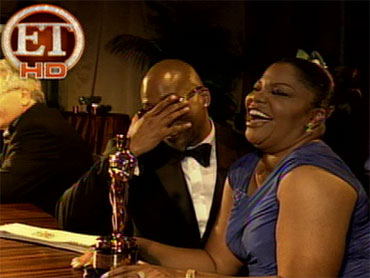 When the red carpet rolls up, the parties roll out. Mary Hart, host of "Entertainment Tonight," was one of the lucky ones invited to party with Oscar last night. Hart shared her night's revels on "The Early Show."

Following the awards show, celebrations heat up all over town, but one of the hottest in Hollywood, Hart said, is always the Vanity Fair party - and she scored an invite.

She said, "I can tell you, it was great to see Oscar co-host, Steve Martin, getting loose with his old 'Saturday Night Live' pal Chevy Chase."

But before Vanity Fair's event, the first stop for Oscar winners is always the Governor's Ball.

At the ball, Mo'Nique said she and her husband Sidney Hicks were planning to do something "a little different" after the awards.

She said, "Tonight we are going to have Uncle Andre's barbecue, and we're going to go home baby, and enjoy it."

For others, the after-party plan was just to bask in a win.

Bullock said, "I wanted to, but the dress wouldn't allow me."

At the Governor's Ball, executive producer Oprah Winfrey lauded "Precious," saying, "This is one of the greatest American success stories: You audition, then (director) Lee Daniels tells you you get the job, and (Mo'Nique) knocked it out of the park."

Elton John told "Entertainment Tonight," "You got to make sure that people who pay a lot of money to get tickets, that they have to have a great evening and make sure that David and I say hello to them."