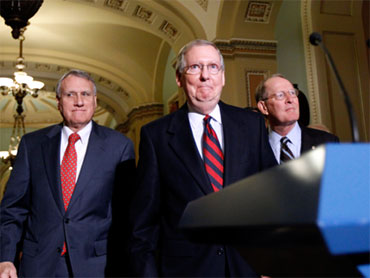 In a blow to President Barack Obama, chances faded Tuesday for Senate approval of a major nuclear arms treaty with Russia this year, tripping up one of the administration's top foreign policy goals: improving relations with Moscow.

Obama has been pushing to get enough Republican support for a vote before the Democratic majority shrinks by six in January, and was optimistic just over the weekend about sealing perhaps his most significant foreign policy achievement.

Part of the task included winning over Sen. Jon Kyl, the leading Republican senator on the New START agreement, who has demanded more funds for the U.S. nuclear arsenal as a condition for approving the treaty. The White House proposed adding $4.1 billion to modernize the arsenal and officials traveled to Kyl's home state to sell the pact, according to a congressional aide. But the senator wasn't sufficiently impressed.

In a statement Tuesday, Kyl said he didn't think the issue should be considered this year, citing a busy Senate agenda and the complexity of the treaty. Democrats are unlikely to be able to move forward without his support.

"When Majority Leader Harry Reid asked me if I thought the treaty could be considered in the lame duck session, I replied I did not think so given the combination of other work Congress must do and the complex and unresolved issues related to START and modernization," Kyl said.

The administration reacted swiftly with Vice President Joe Biden warning that Senate failure to ratify the treaty would endanger the national security of the United States. Without ratification, Americans will have no way to verify Russia's strategic nuclear arsenal and cooperation would weaken between two nations that hold 90 percent of the world's nuclear weapons, he said.

The administration is worried that ratification could slip out of reach if the vote is delayed until next year. Even with their current large majority in the Senate, Democrats have struggled to win enough support from Republicans, many of whom have opposed the treaty or raised concerns. Sixty-seven votes are needed for ratification.

Kyl's rejection of fast action will likely set the treaty back at least for months because Republicans will probably demand new hearings in the Senate Foreign Relations Committee so that newly elected lawmakers are briefed.

State Department spokesman P.J. Crowley said that the administration believes it has already addressed the concerns of Kyl and other Republicans on the treaty and funding for the U.S. nuclear stockpile.

"The New START treaty is in our national interest and we believe it should be voted upon in this lame duck session," Crowley said.

Kyl said that he had spoken with Reid Monday night. The Republican senator's support is crucial because a number of his Republican colleagues have said they will follow his lead on the treaty.

Kyl has maintained that boosting funding for the stockpile would ease Republican concerns about the treaty by demonstrating that the administration is serious about maintaining a robust U.S. nuclear deterrent. The treaty would reduce U.S. and Russian limits on strategic warheads to 1,550 for each country from the current ceiling of 2,200. It also would set up new procedures to allow both countries to inspect each other's arsenals to verify compliance.

Some Republicans have argued that the treaty would limit U.S. missile defense options and does not provide adequate procedures to ensure that Russia is living up to its terms. Advocates dispute both charges.

Failure to win passage could trip up one of the administration's top foreign policy goals: improving relations with Russia. The treaty, signed in April by Obama and Russian President Dmitry Medvedev, has been the most tangible sign of success, and failure to get it ratified could be viewed as a rebuke in Moscow. It also would leave Obama's push for even greater restrictions on the world's nuclear arsenal in doubt.