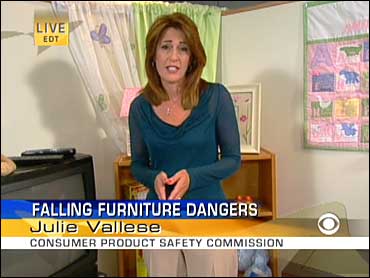 The problem of kids being killed by TVs and other types of furniture falling onto them appears to be getting worse.

The Consumer Product Safety Commission says the number of TV tip-over deaths reported from January through July is twice the typical yearly average. There are usually five deaths reported to agency each year from TVs tipping over onto young children, but 10 deaths have been reported already this year.

For 2000 through 2005, the CPSC has reports of 36 TV tip-over-related deaths and 65 furniture tip-over deaths. More than 80 percent of all these fatalities involved young children. In addition, the CPSC estimates that in 2005, at least 3,000 children younger than 5 were treated in United States emergency rooms due to injuries associated with TV tip-overs.

On The Early Show Tuesday, CPSC spokeswoman Julie Vallese told co-anchor Rene Syler the CPSC "can only speculate" on why the rate seems to be rising. "People buying larger TVs, but not investing in stable furniture to put it on" could be one factor she said. "Also, we have a new generation of parents, so this is something we have to educate and re-educate (them about). Parents have so many hazards they have to think about, and this is one they just really need to be aware of."

So, for starters, Vallese urges parents to be sure the stands they have their TVs on are strong enough to support them.

Other tips: don't put remotes, toys, or other items attractive to kids on top of TVs. Youngsters would then be more likely to pull the TV down onto them if they reach up to try to get the item.

Also, beware of drawers and compartment doors that open easily in furniture a TV is on, or any furniture. Kids could try to use them as steps on a ladder, which could bring the furniture down on them.

Another tip: Don't put TVs on top of freestanding bookshelves, especially rickety ones. Kids can being the shelves down on them if they try to get to the TV.