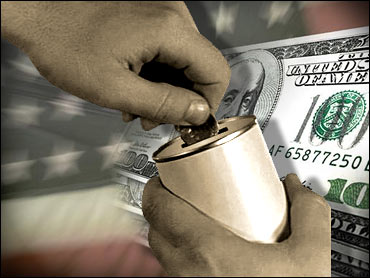 State lawmakers across the nation have come up with an unusual alternative to raising taxes for their cash-strapped states: "Tax Me More" funds that rely on donations from taxpayers.

"We have to be innovative and think outside the box when it comes to generating new revenue," said Pennsylvania state Rep. Jeff Coleman, a Republican. "The public is not going to swallow a massive tax, bond and spend package."

Within the past year or so, "Tax Me More" proposals have surfaced in states such as Kansas, Alaska and Oregon, sponsored by legislators opposed to raising taxes in a weak economy.

A Rendell spokeswoman declined to comment on whether the governor would sign Coleman's measure if the Legislature passed it.

Coleman said he modeled his bill after a fund established by Arkansas Gov. Mike Huckabee in November 2001.

Huckabee's "Tax Me More Fund" was a response to legislators who insisted that tax increases or other measures were needed to offset $142 million in budget cuts. To date, it has taken in between $2,000 and $3,000, according to his spokesman, Jim Harris.

"He said 'Put your money where your mouth is, and if you feel like you're not paying enough, then go ahead and write a check,"' Harris said.

While other states have introduced "copycat" legislation, few if any measures have gotten very far, said Pete Sepp, spokesman for the National Taxpayers Union in Washington.

"I think that this is the type of legislation that is often proposed and often disposed of," Sepp said.