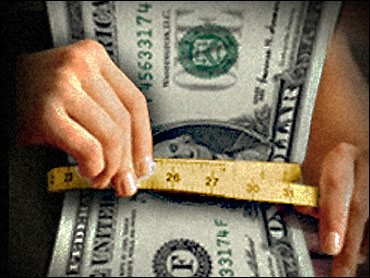 Despite draining rainy-day and other reserve funds, state governments still could face a collective budget shortfall of $40 billion or more next year, the nation's governors say.

State lawmakers have responded with the largest tax increases in a decade, but may have to raise taxes even further or cut higher education and other state programs already scaled back in current spending plans.

"We don't have an estimate of the total shortfall because states are going back now and re-estimating revenues in budgets," said Raymond C. Scheppach, executive director of the National Governors Association. "But my sense is, probably, we have a shortfall of at least $40 billion now. That's going to be a drain on the economy going forward."

State budgets are in their worst shape since World War II, and soaring health care costs and a sputtering economy that hurt tax collections are to blame, said a report the governors association released Monday.

Fiscal problems have spread to many levels of government, from the federal budget that has gone from surplus to deficit, to several cities facing a numbers crunch.

New York City Monday passed an 18 percent increase in property taxes and $850 million in budget cuts just to try to close this year's budget gap. More dire steps — including reinstating a tax on those who work in the city but live elsewhere — have been proposed to narrow a possible $5 billion deficit looming next year.

The report found that 23 of 49 states raised taxes; Florida did not participate in the survey. Cigarettes and other tobacco products saw the biggest tax hikes.

"It's a pretty dire outlook for states," Scheppach said. "Unfortunately, even when the economy comes back, it will help, but I think states are going to continue in a very, very difficult situation for at least the next two or three years until, in particular, we get some major reforms in the Medicaid program."

Exploding health care costs, which generally make up one-third of state budgets, continued to outpace tax revenue for state governments, many of which already have cut services, combined programs and trimmed work forces to try to keep pace, the report said.

Spending on Medicaid, the state- and federally funded program for the poor, elderly and disabled, accounted for the largest portion of health care costs. It grew 13.2 percent last year, the fastest growth rate for the program since 1992, the report said.

The Senate passed a bill last July to send states $9 billion in Medicaid assistance. The legislation received support from both Democrats and Republicans, passing on a 75-24 vote, but has stalled because the House has not passed a similar plan. The nation's governors are pressing lawmakers to revive the measure.

Scheppach said state revenues dropped last year by 6 percent, the first collective decrease since World War II. Nearly every state reported shortfalls at the end of the fiscal year, many even after dipping into rainy-day funds.

The National Conference of State Legislatures reported last week that even after scaling back spending plans, states are seeing a $17.5 billion budget shortfall just three months into the fiscal year.

Another report released Monday said states saw a slight increase in tax revenues during the first quarter, but not enough to reverse the downward trend of the past two years.

The Nelson A. Rockefeller Institute of Government found increases in corporate and sales taxes, with a drop in personal income taxes. Though that added up to a 2.4 percent increase in state revenues from July through September, inflation and other legislative changes would erase most or all the gains, Rockefeller analyst Nick Jenny said.

Scheppach said state budget shortfalls could hurt residents in a number of ways, from tuition hikes at state colleges to reductions in Medicaid benefits. State workers could lose jobs.

States are looking to the federal government for help, Scheppach said. About $3.5 billion has yet to be appropriated to states to help them enact homeland security measures, he said, and they are hoping to receive several billion dollars to institute changes in the way states must conduct their elections.