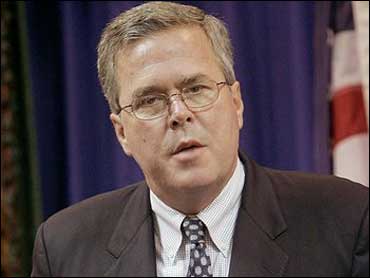 This column was written by Kathryn Jean Lopez .

I'll be the first to admit this is improbable. But it should not be written off as impossible. It's still early. And there's still time to play with possibilities in order to help bring out the best in the field.

In conversation, at least one experienced political hand agrees that conservatives might vote for the 53-year-old term-limited governor — the first Republican governor reelected in the Sunshine State's history. "At the end of the day, conservatives are looking for a leader with a proven record of accomplishment, an intellectual understanding of, and commitment to, conservative values with the skill and energy to lead the country in a conservative direction. Jeb is one of the few potential candidates who meets all of those criteria." Jeb might be just what demoralized conservatives want and need.

Time and again, conservatives impressed with his record as Florida governor admit that Jeb Bush would be an obvious — if not the obvious — choice for the GOP in 2008, if it were not for his name. An advocate for school choice, tax relief, spending responsibility, and the sanctity of innocent human life (leading fights for parental-notification and supporting efforts to keep the late Terri Schiavo alive), he's regularly praised for being a reliable conservative executive—and an effective one at that.

Bush also offers something to those who aren't necessarily ideologically with him. Compare hurricane management in Louisiana versus Florida as a quick example. My same D.C. observer continues, noting that Bush is "remarkably popular to this day in a state where support for other Republicans is far lower. He is bilingual and comfortable with diverse audiences without being patronizing, and he has done more than his fair share to help other conservative Republicans win in key states around the country." And look at the map — Florida is a key electoral state for either party to win, and it goes without saying that Bush is popular there.

Now, of course, if Bush doesn't want to run for family reasons, as many suspect, that's one thing. If he really just wants to return to Miami after his gubernatorial service, live a little more privately, that's his prerogative. Others wonder, though, if by the time you read this column, he may have jumped into the Florida Senate race in order to save his state — and the national Republican party — from a potential loss of majority status in Washington. I wouldn't bet on it, but it would give him a wider record on national issues.

In the end, I suspect, we will all be a little too reticent for a brother-to-brother presidential transition. So maybe he's the No. 2 this time around. Romney-Bush? Allen-Bush? Either match-up would give you a tested executive powerhouse—Mitt Romney and George Allen have served as governors, of Massachusetts and Virginia, respectively (in my order of preference). Others will suggest McCain-Bush, teaming him up with the media-loved Arizona senator.

If Bush's only reason for not running for president in 2008—or any other year—comes down to his being a Bush, that would be a shame. There's nothing in the Constitution prohibiting people who have too many family members who've been elected to the job. Nor should there be. As one Floridian recently e-mailed me, "I'm against these familial dynasties, but in the Bushes' case, they've saved the best for last, and I see no reason to punish ourselves by not electing a capable Jeb, just because his father and brother were mixed successes at best."