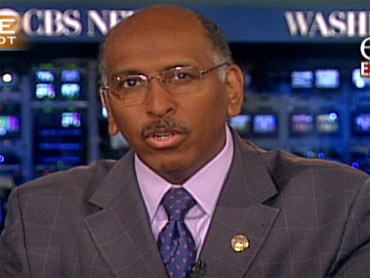 (CBS)
As President Obama readies an address to Congress Wednesday night to save his stalled health care agenda, Republican opposition to the public option – a government-run insurance program designed to compete with private insurers – remained stiff.

"And quite frankly I think a lot more people believing that there's more to this than meets the eye. And the reality of it is, you know, I just don't understand this idea that somehow people think that the federal government can enter into a marketplace and compete with private industry. That goes counter to everything that we know about how markets work and the role that the government plays in those markets."

But, as Smith pointed out, Medicare is a government-run health insurance program that is largely supported by the public – and has escaped the stigma of socialism.

"[But] how often do we have to do another reset on Medicare because it's in default or running out of money?" Steele countered.

"If this is a matter of getting a certain number of people insurance, then let's work to get them into the insurance market," he added. "There are ways to do that. You can create in situation with respect to pre-existing conditions, address that issue through portability. You don't have to up end the entire system. To do this comprehensively just is not the way this should be done in my view and the view of a lot of people."

Earlier, White House Press Secretary Robert Gibbs told "The Early Show" that the president would address the public option and the need for "choice and competition" during his Wednesday. Gibbs said the public option was still on the table but declined to say how far Mr. Obama would push for it – something that has drawn the ire of many of his supporters.

Steele said the president's speech would just be "one more opportunity to tell us what we already know."