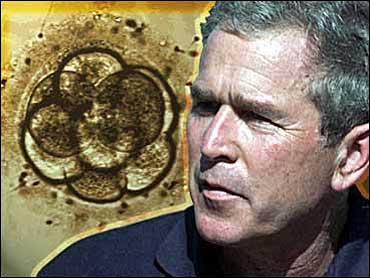 Prominent American stem cell researcher Roger Pedersen of the University of California is packing his bags for Britain, feeling the rules there will allow him to pursue his line of work more freely than he could here.

And CBS News correspondent Tom Fenton reports critics of President Bush's policies on such research fear Pedersen will only be the first of many to go that route.

"It's a shame that many of our best stem cell scientists are going to feel that they need to move to another country to pursue their research program," Stanford University Medical School neuobiologist tells CBS News.

Fenton says Britain is among the nations that would welcome U.S. researchers with welcome arms. He reports the debate about stem cell research is much further along there than in the U.S., and most scientists seem comfortable with the regulations there.

This as attention is drawn to a little-known fact about the cells that's been lost amid the political and ethical ruckus: Some of the human embryonic stem cells that have been grown have been helped along by mouse cells, CBS News Medical Correspondent Elizabeth Kaledin reports.

How? "The analogy is a fungus on bread or on a tree," explained Dr. Alan Robins. "There is a relationship there, the stem cells need the mouse cells to survive."

But the potential hitch in stem cell technology is that the mouse cells could transfer dangerous animal viruses to the embryonic stem cells, making them impossible to use in human clinical trials under federal regulations.

Indeed, the FDA has allowe cells from pig fetuses to be implanted experimentally into the brains of Parkinson's disease patients. A Massachusetts company for 10 years has grown burn victims skin grafts using mouse "feeder" cells like those at issue with stem cell research.

The question then becomes how many of the 60 human embryonic stem cell colonies, or "lines," that President Bush says can be studied with federal money will meet FDA's criteria. That won't be known until the Bush administration identifies all the laboratories that created those cells and details about them.

The uncertainty is sparking criticism that Mr. Bush limited federal funding to only stem cell lines currently in existence.

The president and his White House advisors say they knew about this all along.

Scientists in the field say while the current cell lines may be fine for early research they could present obstacles when human clinical trials begin in three to five years. According to Robins, "We're going to have to find a way to use human feeder cells before clinical trials."

That could be a problem since the president will not allow funding to create new stem cell lines.

Click here for a closer look at the Bush presidency.
Click here for a look at the stem-cell debate.
Mr. Bush said Friday he believes his restrictive policy on federal funding will allow scientists to determine whether or not these primitive master cells can lead to breakthrough medical treatments.

The president said he made his decision based on assurances from experts at the U.S. National Institutes of Health.

"The NIH came into the Oval Office and they looked me right in the eye and they said, 'We think there is ample stem-cell lines to determine whether or not this embryonic stem-cell research will work or not,"' Mr. Bush said.

He added, "This is their opinion. And I can think of no better opinion on which to make, base my judgment. So I haven't changed my opinion in the least."

Researchers hope to develop treatments for various medical conditions by using these cells to regenerate healthy tissue to replace tissue damaged by disease or injury. Among the illnesses that could be addressed by such new treatments are Alzheimer's disease, Parkinson's disease, juvenile diabetes and spinal cord injury.