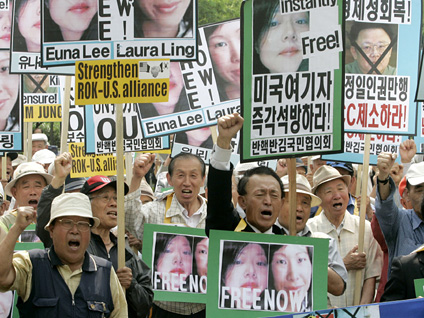 Braving a haunting stench of death, Palestinian refugees searched for loved ones and possessions Thursday under the devastation of Israel's incursion, which a U.N. envoy described as unjustified by any military objective.

Terje Larsen said some 300 buildings were destroyed and 2,000 people were left homeless in the Jenin refugee camp, scene of the bloodiest fighting of Israel's three-week campaign to capture or kill armed militants.

"Not any objective can justify such action, with colossal suffering" to civilians, said Larsen.

Using household brooms, Palestinians wearing green surgical face masks brushed away the dust, gradually uncovering chunks of flesh and bones. Above them, the upper story of the shattered building threatened to cave in.

"Careful, careful, look for the body parts," said one of the excavators as he moved debris out of the wreckage.

Flies swarmed about as what appeared to be a broken rib cage and other body parts were lifted from the ruins, loaded onto a stretcher, and carted off. Those nearby handed out perfume bottles to workers to try to sweeten the acrid air.

The refugee camp was the center of the fiercest fighting between Israeli troops and Palestinian gunmen during Israel's three-week offensive on the West Bank, launched in the wake of a spate of suicide bombings against Israelis.

So far, 30 bodies have been found in Jenin. Residents say noncombatant civilians were trapped in buildings as they collapsed. They put the death toll in the hundreds and call it a massacre.

Israel says fewer than 100 people were killed, most of them militants. Israel lost 23 soldiers in the operation. The Israelis blame the Palestinians for the carnage, saying militants refused warnings to evacuate and then booby-trapped themselves and buildings.

But how many people might have been buried in Jenin is impossible to know until the heavy lifting equipment clears the rubble. Judging by the stench of decaying flesh hanging over the camp, there are some corpses buried, reports CBS News Correspondent Mark Phillips.

Jenin hospital director Muhammed Abu Ghali said the Israeli army handed over five bodies from a refrigerated truck Wednesday to workers from the Palestinian Red Crescent and International Committee of the Red Cross.

Palestinians have struggled to find space to keep the decomposing corpses. In the garden of Abu Ghali's hospital, small mounds of earth mark the temporary graves of some 15 bodies recovered from the camp.

Some refugees scrabbled for belongings in what remained of their homes, wary that as they dug, they might uncover more gruesome finds.

Zaki Saleh Hindi, 36, fled his home with his family when four Palestinian gunman raced into the house as the fighting raged elsewhere in the camp. Now his home, like so many others, is a mound of crumpled masonry.

"Everything I had was destroyed. Maybe the four (gunmen) are under the rubble now," Hindi said as he and his brother clawed at the ruins in search of their wives' jewelry that could be sold to help support their families.

Witnesses said Israeli forces had bulldozed or blown up many of the camp's buildings. The army has blamed Palestinian militants for much of the destruction, saying they planted bombs and booby-traps aimed at killing soldiers.

The Red Crescent has appealed for international search and rescue teams to be sent to the camp to help remove bodies from the wreckage, where Palestinians have used the most basic tools or their hands. Red Cross workers said they were setting up a tracing system to help locate or identify the missing.

In a related development, U.N. Secretary-General Kofi Annan appealed to the international community Thursday to act quickly to deploy a "robust" armed international force to the front lines of the conflict.

Elaborating to the U.N. Security Council on a proposal he made in Geneva last Friday, Annan said an impartial force large enough to take "decisive action" is essential to end the deadly cycle of attacks and reprisals.

The multinational force should be put together by countries willing to supply troops and have "a robust mandate," he said, but the Security Council should authorize its operation under Chapter VII of the U.N. Charter, which sanctions the use of military force if necessary, he added.