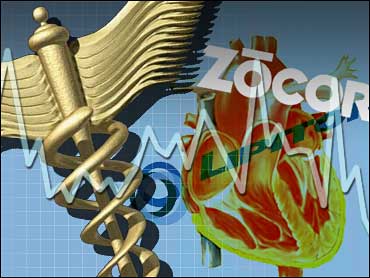 Inflammation could be a prime culprit in heart disease, a new study shows.

In fact, reports The Early Show medical correspondent Dr. Emily Senay, a new school of thought is emerging that says inflammation may play a larger role in heart disease than cholesterol levels.

Senay explains that inflammation is the body's natural immune system reaction to infection or injury, like the redness and swelling around a wound. It can also occur in tissues and the blood vessels within the body, where we can't see or feel it.

It happens in blood vessels along with the fat buildup associated with hardening of the arteries.

Other causes include high blood pressure or chronic low-level infections that put constant pressure on the immune system.

Inflammation is measured with a blood test for C-reactive protein, or CRP, which is produced by the body when it's fighting off infection.

A new study offers the strongest evidence yet that inflammation is a major factor in the progression of heart disease.

The study, in Thursday's New England Journal of Medicine, shows that reducing inflammation by lowering the levels of CRP in the blood in people with severe heart disease led to fewer heart attacks and deaths, and slowed the progression of heart disease.

CRP levels were controlled in study participants with high doses of the widely-prescribed statin drugs we know are effective in controlling LDL, or "bad" cholesterol. So statins now appear to be useful in fighting heart disease on two fronts.

Other methods that have been shown to lower levels of CRP include maintaining a good diet, exercising, losing weight and quitting smoking.

Many experts think controlling inflammation by monitoring and curbing CRP levels is at least as important as keeping cholesterol under control.

Senay adds that the question of which is a better heart disease predictor, cholesterol or CRP levels, is likely to spark lots of controversy in coming years.

So, who should get tested for CRP levels? "This is (also) an area of controversy," Senay notes. "People in these studies were high-risk people and already had heart disease. Let's see where this debate goes. Some say everybody should get screened and some people saying too soon to say. We'll stay tuned on this."