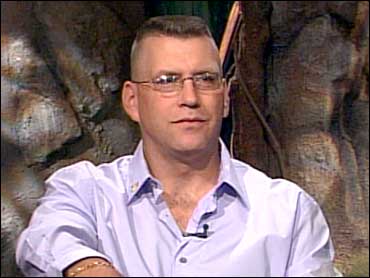 His real name is Lea Masters, but "Survivor: Vanuatu" fans know him as Sarge. He says he was booted out of the game in Thursday's episode because of his physical strength.

When he won the immunity challenge in the previous week's episode, Masters told co-anchor Julie Chen on The Early Show Friday morning, "I laughed at everybody. And so when I finished,I shook my head and I said, 'You just screwed up.'"

The South Carolina drill sergeant spoke in military terms of the game, as well as the strategy of the former Lopevi tribe. His colleague, Chris, was the linchpin in the vote that ousted him, Masters said. "He knew I was gone, so he wanted to keep it on a level base so he could come from behind maybe later on and stab them in the back for me, you know, out of respect. I got them. They got you, I got them. We're a team. We won the war. Had casualties, but the war was won."

Masters said he was not tempted to stab others in the back because no "Survivor" victory is worth compromising his principles: "Money doesn't matter when it comes to your values because my character, the people I train, the soldiers I train, know that Drill Sergeant Master Sarge will not lie, will not give his word away, not for money, not for any amount of work."

If it wasn't about the money, why did he compete in "Survivor"?

So, when tryouts came to his state capital, he said, he decided to try out so that his son would leave him alone. Instead, he was chosen as a contestant.

As the first member of the jury that votes for the winner, Master said he thinks Twila may emerge as the victor.

In Thursday's episode, Masters appeared to be repelled by what he called the "conniving" of the women. After the tribal council in which Rory got the boot, the men and the women returned to camp and sat on opposite sides of the fire in the hours of darkness.

The reward challenge was a quiz, a trivia game about Vanuatu islands. Each tribe member had three skulls, which would be lit on fire if another person targeted them. Whoever got the question right got to light one of the other member's cranium bones. When all three skulls of his were lit, that island dweller was out.

As expected, the women made quick work of the men. As Chris put it, it was "estrogen city."

The women, now cannibalizing themselves, turned quickly to assassinate the other females. Everyone felt a sting of betrayal.

Leann won the challenge and picked Julie to go picnicking with her. First up was a helicopter ride to the top of a dormant volcano for a breathtaking view. Then came a feast of champagne and chicken wings. Though the combination doesn't sound terribly appealing to either the taste buds or the digestive tract, both women were very excited.

In between sucking chicken bones and licking greasy fingers, Julia and Leann discussed tactics. Julie said she'd be faithful. But given her track record with trust, it can't be said whether or not she will keep her word.

After the challenge, the men saw cracks in the structure of the femme-faction. Eliza and Scout made it clear that they despise each other, giving the men an opportunity to strike back.

While the men were away, Julie and Leann smuggled back several pieces of chicken for their female colleagues. The men received only bones – unaware that the women had all ready gnawed off the meat. The women cackled among themselves as the men gratefully picked through their second-hand bones.

On her way to get tree mail, Eliza found a pig tied up. Eliza walked back to the beachhead dragging the screaming pig behind her. The squealing cacophony wasn't appreciated and some argued in favor of eating the pig. But Sarge began to develop a bond with it.

For the personal immunity challenge, the contestants were given wooden puzzles with painted pieces. Contestants had a certain amount of time to mimic different configurations shown them by host Jeff Probst. All three men were knocked out in the first round, undoubtedly because they were unused to trying to memorize colors and playing memory games. Ami triumphed.

Then it was a last-ditch scramble by the men to break up the women's alliance, which outranked them 6-3. Sarge put the screws to Twila, who admitted that she had gotten along better with the men.

But when the votes were read, it was another man who handed over his torch.
By William Vitka