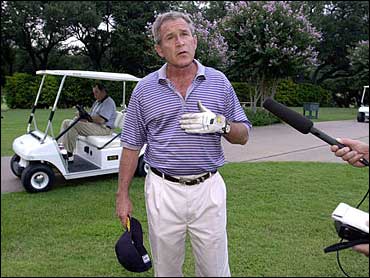 President Bush described Iraq on Saturday as an "enemy until proven otherwise" but reaffirmed he had no timetable for deciding whether to use military force to topple Iraqi President Saddam Hussein, or "for any of our policies in regard to Iraq."

Mr. Bush said a decision on which course of action to take may not come this year.

In Washington, Iraqi opposition leaders heard from Vice President Cheney and met with Defense Secretary Donald Rumsfeld, among the Bush administration's strongest voices for consideration of military action to replace the Iraqi president with a democratic government. They also saw Gen. Richard Myers,
chairman of the Joint Chiefs of Staff.

"We are very optimistic that they will do something to affect regime change," said Sharif Ali of the Iraqi National Congress, referring to U.S. officials. "We are working with them to facilitate that because ultimately the U.S. did agree with us that it was up to the Iraqi people."

The president, speaking to reporters just before a round of golf at the Ridgewood Country Club, said the Iraqi president has "a history of tyranny. I think most people understand he is a danger."

Under increasing pressure from some members of Congress and many foreign allies not to launch an unprovoked attack on the longtime Gulf foe, Mr. Bush made clear, as he has done in public speeches, that he has many tools to help the U.S. deal with Iraq.

"And I've also said I am a deliberate person," he added. "So we're in the process of consulting not only with Congress but our friends and allies."

The president has emphasized the consultation process, in an effort to cool
what the White House views as a frenzy of speculation about possible military action.

Asked whether the American people are prepared for U.S. soldiers' deaths in any military campaign aimed at Saddam, Mr. Bush said, "I think that that presumes there's some kind of imminent war plan."

"I want people to fully understand our deep concern about this man, his regime. As I said I have no timetable."

"What I do believe the American people understand is that weapons of mass destruction in the hands of leaders such as Saddam Hussein are very dangerous for ourselves, our allies," the president said.

"They know that when we speak of making the world more safe, we do so not only in the context of al-Qaeda and other terrorist groups, but nations that have proven themselves to be bad neighbors and bad actors," Mr. Bush added.

If the u.s. goes to war, it will likely go it alone, says CBS News correspondent Mark Knoller. The estimated cost of up to $80 billion might have to be born by US taxpayers and not by American allies, as in the last Persian Gulf War, reports Knoller.

Against a backdrop of Iraq's consistent refusal to readmit international weapons inspectors, Mr. Bush told reporters Saturday: "They obviously desire weapons of mass destruction. I presume that he still views us as an enemy."

Mr. Bush, who is vacationing at his ranch in nearby Crawford, reminded reporters that he designated Iraq, Iran and North Korea in January as members of an "axis of evil."

Referring to Iraq, Mr. Bush said before golfing: "I described them as the axis of evil once. I describe them as the enemy until proven otherwise."

"We owe it to our children's children to free the world of weapons of mass destruction in the hands of those who hate freedom."

After their talks with top U.S. officials on Saturday, the Iraqi opposition leaders said the Bush administration is already looking beyond Saddam's ouster to the establishment of democracy in Iraq.

The session marked the highest level discussions that the often fractious and sometimes discredited Iraqi opposition has held with this administration.

"(They said) they support a democratic regime in Iraq, that they would not support replacing one dictator with another," Ali, of the Iraqi National Congress, told reporters in Washington after the talks. "Their vision for Iraq was for a free Iraq that was democratic and liberalized."

"They made it quite clear that the 'how' and the 'when' have not been decided yet. It was absolutely clear to us that the United States is completely serious, committed and determined to bring about regime change in Iraq," he added.

While hawks and doves in the administration tussle over how to deal with Saddam, Saturday's talks were a measure of the importance Washington now attaches to the opposition after years of dismissing it as divided and ineffective.

Sean McCormack, spokesman for the White House National Security Council, said U.S. officials met the Iraqi opposition leaders for 90 minutes and for half of that time hooked up by videoconference with Cheney, who is vacationing in Wyoming.

"The teleconference was part of our efforts to strengthen support for the opposition to the regime in Baghdad," McCormack said, adding Rumsfeld dropped by the meeting.

The opposition leaders received assurances during a State Department meeting Friday that the U.S. will fulfill commitments to protect Iraqis who face possible attacks from Saddam's forces.

"We're very optimistic about these meetings and we think it's a good sign of U.S. commitment to helping the Iraqi people overthrow the regime of Saddam Hussein and his rule of tyranny and the threat against the international community," Ali said before Saturday's session.

U.S. officials in Washington recalled after Friday's meeting with the opposition leaders that Saddam used poison gas against Iraqi Kurds in 1988 and sent troops into the Kurdish areas in 1991 to put down an uprising shortly after the end of the Persian Gulf War.

In the event of any additional attacks on the Kurds, the U.S. would respond, said an official, who agreed to discuss the situation only on grounds of anonymity.

The U.S. officials said the Iraqis made no request for military aid or training. They said the U.S. side was struck by the conviction of each of the Iraqi leaders to fight for a democratic Iraq and for the establishment of the rule of law.