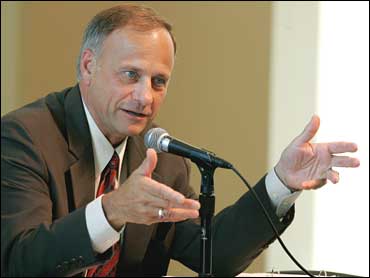 Iowa Republican Rep. Steve King said in an interview with CBS News today that he is "looking at dropping a bill early in the 112th Congress" to end the practice of giving U.S. citizenship to U.S.-born children of illegal immigrants.

King, who will likely head the immigration subcommittee when the new Congress begins work in January, predicted that hearings on the bill would not be immediate, since there are "other priorities" to be dealt with. He said he expected hearings "in the next couple months" after the legislation is introduced.

King says that the clause "and subject to the jurisdiction thereof" means that babies born to illegal immigrants do not necessarily have Constitutionally-protected citizenship rights. He also argues that it is important to consider the history behind the amendment, which was adopted in 1868.

"The 14th Amendment and that specific clause was put in place immediately post-Civil War for the purpose of ensuring that babies born to newly freed slaves would be American citizens," he said, adding that it had nothing to do with citizenship for the children of illegal immigrants.

At left, King discusses the issue on Fox News Friday.

King told CBS News that the "subject to the jurisdiction thereof" clause was included at the time to exempt babies born to diplomats and certain Native Americans who were living on reservations, and that the clause can also be applied to children born to illegal immigrants.

The Iowa congressman argues the change is necessary because of an "anchor baby industry" that exists to exploit the law, which he says incentivizes immigrants to enter the United States to have children. King says that between one in six and one in 12 (or between 340,000 and 720,000) babies born in the United States are born to illegal immigrants, who take advantage of the baby's legal status to gain government benefits.

Those on the other side say the number of people who are motivated to come to America to create "anchor babies" is small and argue it could be dealt with by outlawing the practice, not eliminating birthright citizenship.

Eliminating birthright citizenship "would punish the innocent children of undocumented immigrants, which flies in the face of American values," according to Michele Waslin, Senior Policy Analyst at the Immigration Policy Center.

Asked about criticisms that eliminating birthright citizenship goes against the American values of inclusiveness, King said that by critics' arguments "everybody born on the planet should be included" as citizens.

"You have to draw the line somewhere," he said.

As McClatchy reports, Republican Reps. Tom McClintock and Dan Lungren are among those who agree with King on the issue.

Americans are split on birthright citizenship: 49 percent said in an August CBS News poll that the law should be kept as it is, while 47 percent said it should be changed.

King said he believes a law to change the policy should be passed without worrying about potential legal challenges. If the law is ultimately struck down in the courts, King said, he would push for a Constitutional Amendment to address the issue, though he acknowledged "it would be difficult" to get an amendment passed.

If a law ending birthright citizenship passes the House, it would still need to get through the Democrat-led Senate and then be signed into law by President Obama to take effect - an unlikely proposition. King said he views his effort as just one step in a process, comparing his work on birthright citizenship to the six years he spent working to make English Iowa's official language, which took place in 2002.

"I have a perspective about the degree of difficulty, but I think you have to do the right thing," he said.