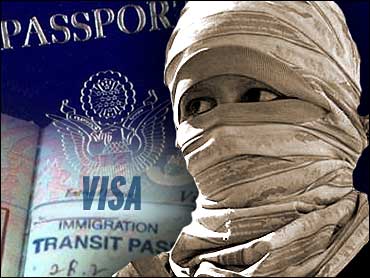 As many as 30 suspected terrorists may still be in the United States because of continuing flaws in the county's visa program and poor communication between federal agencies, congressional investigators said Wednesday.

The General Accounting Office said that while the government revokes visas of suspected terrorists, there is often little effort to find and remove those people from the country.

And the weaknesses in the visa revocation process "increase the possibility of a suspected terrorist entering or remaining in the United States," the GAO said.

In many cases the State Department failed to notify the FBI or the Immigration and Naturalization Service of the visa revocation or notified them days later. The State Department also often failed to post the individuals' names on its own watch list, which would alert consular offices overseas.

The GAO also found that the INS and FBI "did not routinely attempt to locate or investigate any of the individuals who entered the United States either before or after their visas were revoked and who may still remain in the country."

But even if they had, the INS may not be able to deport such individuals, because a visa revocation is not sufficient grounds for expulsion under federal law.

The GAO is recommending that the visa revocation process be strengthened so agencies are notified in a timely manner and that agencies have proper procedures to investigate and find people whose visas have been revoked.