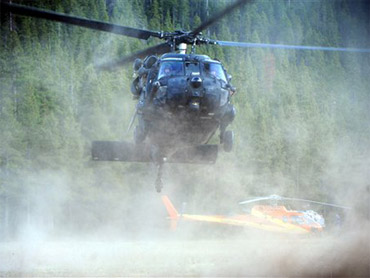 "At this point, discussions are ongoing," national security adviser Stephen Hadley told The Associated Press as he left McCain's Capitol Hill office after a meeting that lasted just over an hour.

"We continue to chat," McCain, R-Ariz., said just before meeting with Hadley.

The ban on mistreatment of prisoners, and another provision standardizing the interrogation techniques used by U.S. troops, have stalled two defense bills in Congress, including a must-pass wartime spending measure.

House and Senate negotiators want to complete the bills before adjourning for the year. But GOP leaders are waiting for the results of talks between McCain and the White House before moving forward.

A compromise could come this week, but a deal remained elusive Wednesday.

The administration fears the provisions could limit the president's ability to stop a terrorist attack and it is seeking to add language that would offer some protection from prosecution for some interrogators accused of violating McCain's provision.

But the senator has rejected that. Instead, he has offered to include language similar to that in the Uniform Code of Military Justice. It would allow accused civilian interrogators — like military interrogators — to defend themselves if a reasonable person could have found they were following a lawful order about treatment of detainees.

McCain has had recent telephone conversations with Hadley while the senator has been on a tour promoting his new book. Their face-to-face meeting Wednesday took on added significance because of the time pressure Congress is under.

In a development that could further complicate the negotiations, The New York Times reported Wednesday that the Army has approved a new, classified set of guidelines that gives details on what interrogation techniques may be used and under what circumstances.

Some military officials said the guidelines could make it seem that the Army was pushing the limits on legal interrogation just as the talks between McCain and the White House were taking place.

Karen Hughes, undersecretary of state for public diplomacy and public affairs, expressed confidence that McCain and Hadley would "reach consensus."

"The goal is the same here," Hughes said on CBS' The Early Show. "The goal is to make it very clear that the United States is a nation of laws and that we operate our detainee policy within our laws, within our international obligations and without torture."

The Senate overwhelmingly approved McCain's provisions, but they were not in the defense bills approved by the House, and House members have not yet voted on them. Congressional aides say it's widely accepted the provisions have enough support to pass in the House.

House leaders have held off moving toward a vote until they get their cue from the White House. After initially threatening a veto and trying to kill the provisions, the White House then switched gears to lobby for an exemption to the ban for CIA interrogators. But McCain balked at that and it was taken off the negotiating table.

The senator has said he won't agree to changes that would undermine the provisions, which he argues are needed to clarify current anti-torture laws in light of abuses at Abu Ghraib in Iraq and allegations of misconduct by U.S. troops at the detention center at Guantanamo Bay.