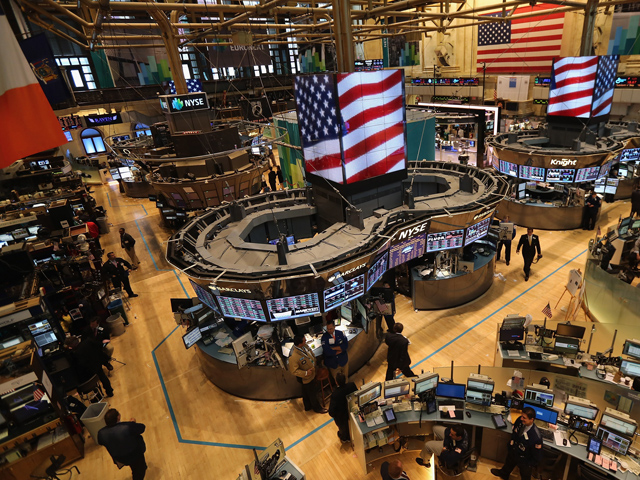 NEW YORK (AP) - Stocks notched their first gain of the week Thursday after Spain announced severe budget cuts intended to convince the world that it can meet deficit-reduction targets.

It was the best day for the U.S. market since Sept. 13, when Federal Reserve Chairman Ben Bernanke announced further steps by the central bank to speed the economic recovery.

Stocks were also helped by speculation that the central bank of China will act soon to help the world's No. 2 economy.

The Dow Jones industrial average climbed 72.46 points, or 0.5 percent, to close at 13,485.97. It was the Dow's first gain in five trading sessions. The average was up as much as 109 points after the Spain announcement.

The Nasdaq and S&P were helped by a jump in Apple stock, reversing three days of declines. Apple (AAPL) gained $16.14, or 2.4 percent, to $681.32 despite an analyst's report reducing estimates for shipments of iPhones later this year.

As fear grew that Spain will need an international bailout, the finance minister said a draft budget for 2013 cuts overall spending by euro40 billion, or about $51 billion. He said cuts for ministries would average almost 9 percent.

The cuts are meant to show world investors and other countries that Spain can meet fiscal targets. The budget unveiling, shortly before noon EDT, lifted the U.S. stock market from what had been only modest gains.

"That's the only major thing that's happened," said Dan Greenhaus, chief global strategist for the brokerage BTIG. "It's an excuse to rally the stock market."

Technology stocks and energy companies made the biggest gains. Utility stocks, which tend to do well when investors are fearful, were the only industry group in the S&P to fall.

The market gains started earlier, in Asia, helped by expectations that the People's Bank of China will act soon. China's biggest steelmaker said Thursday it has shut down a mill in Shanghai, a sign of weakening growth.

In the U.S., investors grappled Thursday with mixed economic data:

- The economy grew at an annual rate of 1.3 percent from April through June, the government said, slower than the previous estimate of 1.7 percent and not nearly fast enough to reduce unemployment.

- Demand for long-lasting manufactured goods plunged in August by the most since January 2009. That was mostly because of a huge drop in commercial aircraft orders, which are volatile. Orders that reflect business investment rose solidly.

- The number of Americans seeking unemployment benefits fell 26,000 last week to 359,000, the lowest figure in nine weeks. A figure consistently below 375,000 is generally enough to lower the unemployment rate.

- The number of Americans who signed contracts to buy previously occupied homes fell in August from a two-year high in July. The National Association of Realtors' sales index is still 10 percent higher than it was a year ago.

In the U.S., demand for government bonds fell, generally an indication that investors are more willing to embrace risk. The yield on the 10-year note, which moves opposite the price, rose 0.03 percentage point to 1.65 percent.

The price of crude oil rose $1.87 to $91.85 per barrel as concerns mounted about a potential military confrontation over Iran's nuclear program. Oil had dropped $9 a barrel in two weeks.

Israeli Prime Minister Benjamin Netanyahu warned at the United Nations that Iran will have enough enriched uranium to make a nuclear bomb by next summer and urged the world to draw a "red line" to stop it.