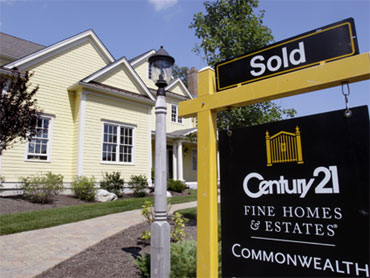 The Dow Jones industrials rose for the seventh straight day, marking another new high for the year. All the major stock indicators finished in positive territory, but the gains were minuscule.

An increasingly cautious mood has gripped the market in recent days, following a period of fervid buying this spring and summer that sent stocks up more than 45 percent since early March. While economic data is improving, investors are now questioning whether the market can go much higher without clear evidence of economic growth.

"The general consensus seems as though the market is ripe for some sort of pullback at some point," said Andrew Frankel, co-president of Stuart Frankel & Co. "We seem to be floating up on air."

With trading volume and news flow tapering down amid Wall Street's annual summer slowdown, analysts say there are few near-term catalysts that could spur the market higher.

Stocks seesawed without a clear direction Wednesday despite a Commerce Department report that said new home sales rose 9.6 percent in July for the fourth straight monthly increase. Sales rose to 433,000, the strongest pace since September and well above the 390,000 figure economists expected.

The latest sign of improvement in housing didn't do much to impress investors, who have already factored in a recovery in the long-suffering home industry. Some of the latest gains can be attributed to a federal tax credit for first-time home owners currently set to expire in November, and the industry has been pressing Congress to extend it.

A separate Commerce Department reported showed that orders for goods expected to last at least three years rose 4.9 percent in July — the biggest jump in two years and more than the 3 percent increase economists had expected.

However the overall increase was driven by a surge in orders for transportation equipment, which benefited from the government's recently expired Cash for Clunkers program that drove thousands of people to trade in older cars for new ones. Excluding transportation goods, orders rose 0.8 percent, just short of analysts' expectations.

Declining stocks narrowly outnumbered advancers on the New York Stock Exchange, where volume came to a light 1.05 billion shares, down from 1.14 billion shares at the close of trading on Tuesday.

Shares of homebuilders surged for a second day after the housing data showed the supply of new homes on the market shrank to the lowest level since April 2007. If supply is decreasing, builders may need to ramp up production.

Retail stocks were mostly higher after a handful of upbeat earnings reports. Shares of Dollar Tree Inc. rose $2.23, or 4.7 percent, to $50.13 after the company posted a 51 percent jump in its second-quarter profit as its deeply discounted goods attracted cash-strapped consumers.

Sharp declines in industrial and material stocks weighed on the market as commodities prices wavered. A long rally in commodities prices that started earlier this year has been sputtering in recent weeks amid concerns of waning demand from China.

Government bond prices were little changed despite favorable demand at an auction of $39 billion in five-year notes. The yield on the benchmark 10-year Treasury note was unchanged from late Tuesday at 3.44 percent.

The dollar mostly rose against other major currencies, while prices for gold and other metals fell.