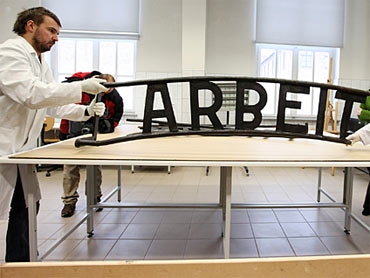 The infamous "Arbeit Macht Frei" sign stolen last month from Auschwitz and broken into three pieces was returned to the museum at the site of the Nazi death camp Thursday.

Police — who had quickly recovered the damaged sign after its theft — gave it to museum officials at a brief ceremony in Krakow. It was then taken to the museum 50 miles (80 kilometers) away, where conservation experts examined the three dark steel pieces of the sign, whose cynical Nazi slogan means "Work Sets You Free."

Thieves had cut up the sign at the site of the death camp the night of their heist to make it easier to transport in their getaway car.

Five Polish suspects have confessed to stealing it on Dec. 18. However, officials are still seeking a suspected neo-Nazi from Sweden who is believed to have ordered the theft, possibly for a collector of Nazi memorabilia, prosecutors said.

The sign has been examined in recent weeks by police forensic experts for evidence, and the museum's conservationists will assess the damage and determine how to repair it, Auschwitz spokesman Pawel Sawicki said.

"It's a very long process," Sawicki said, stressing that the sign would not be returned any time soon to its original spot above the main entrance at Auschwitz — if at all.

Sawicki said officials must still decide whether to eventually put back the original sign or leave up the replica now in its place.

Rabbi Andrew Baker, a member of the International Auschwitz Council, said the group hasn't met on the matter but that he believes the original sign should be returned to maintain the historical authenticity of the site.

Many other Nazi death camps, such as Treblinka and Belzec, were completely destroyed by the Nazis themselves in an attempt to cover up their crimes. But Auschwitz's crematoria and other structures still stand as a testament to Nazi atrocities. The site, however, is in a dilapidated state and the Polish government has been raising money to keep it up for future generations, recently getting a pledge of euro60 million ($84 million) from Germany.

"I think particularly now, when there is a major campaign to raise funds to ensure the preservation of the place, what matters most is the authenticity really of almost every item," said Baker, the director of international Jewish affairs at the American Jewish Committee.

"So I would really hope and expect that the original sign will be returned."

The sign is one of the first sights to confront the more than 1 million visitors per year to the former Nazi German camp in southern Poland. Most walk under it as they make their way to visit barracks, ovens where gassed bodies were cremated, underground torture chambers and other sites where atrocities were committed.

Between 1940 and 1945 more than 1 million people, mostly Jews, were killed in the gas chambers of Auschwitz and its satellite camp, Birkenau, or died of starvation or disease while forced to do hard labor at the camp.

The museum plans ceremonies next week to mark the 65th anniversary of the camp's liberation by the Soviet army on Jan. 27, 1945.