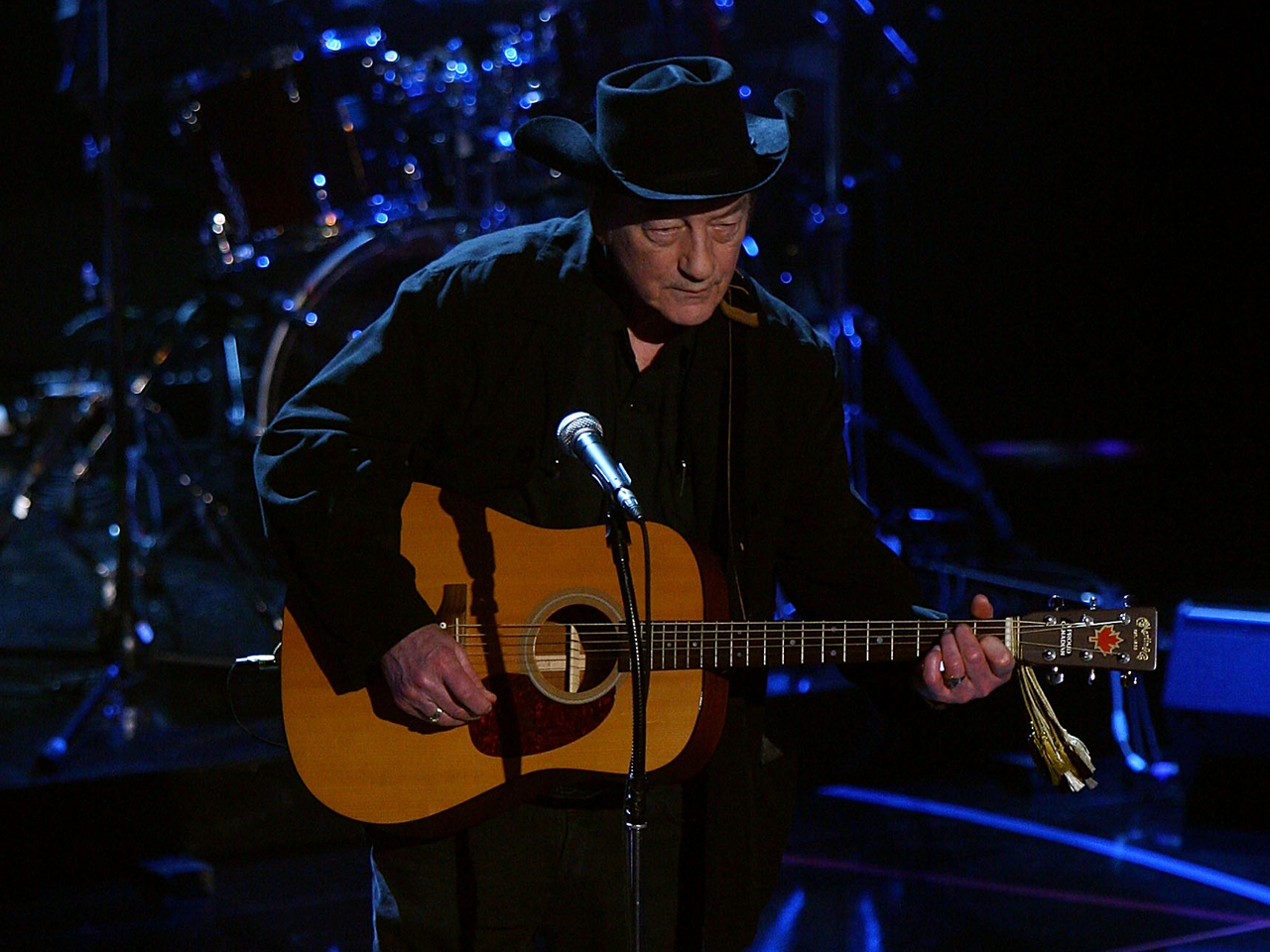 Canadian country-folk singer Stompin' Tom Connors, whose toe-tapping musical spirit and fierce patriotism established him as one of Canada's biggest cultural icons, has died, his promoter said Wednesday night. He was 77.

Those three songs are played at every Toronto Maple Leafs home game. At Toronto's Air Canada Centre Wednesday night, many fans took to their feet as "The Hockey Song" was played after Connors' death was announced.

Although wide commercial appeal eluded Connors for much of his four-decade career, his songs are regarded as veritable national anthems thanks to their unabashed embrace of all things Canadiana.

"The hockey song was the biggest one," Edwards said. "Domestically he was known everywhere."

On Twitter, Prime Minister Stephen Harper said "we have lost a true Canadian original. R.I.P. Stompin' Tom Connors. You played the best game that could be played."

The National Hockey League tweeted: "Sad to hear that legendary Canadian Stompin' Tom Connors has passed. His legacy lives on in arenas every time 'The Hockey Song' is played."

Connors knew his health was declining and had posted a message on his website a few days ago, saying Canada kept him "inspired with its beauty, character, and spirit."

Dubbed Stompin' Tom for his habit of pounding the floor with his left foot during performances, Connors garnered a devoted following through straight-ahead country-folk tunes that drew inspiration from his extensive travels around Canada, dating back to his itinerant teenage years when he roamed the country working one job or another.

The country that Connors celebrated in song was strangely ignored by other Canadian songwriters, he often said.

"I don't know why I seem to be the only one, or almost the only one, writing about this country," Connors said in 2008. "This country is the most underwritten country in the world as far as songs are concerned. We starve. The people in this country are starving for songs about their homeland."

He was born in Saint John, New Brunswick, on Feb. 9, 1936, to an unwed teenage mother. According to his autobiography, "Before the Fame," he often lived hand-to-mouth as a youngster, hitchhiking with his mother from the age of three, begging on the street by the age of four. At age eight, he was placed in the care of the charity Children's Aid and adopted a year later by a family in Skinner's Pond, Prince Edward Island. He ran away four years later to hitchhike across Canada.

Connors bought his first guitar at age 14 and picked up odd jobs as he wandered from town to town, at times working on fishing boats, as a grave digger, tobacco picker and fry cook.

Connors is said to have begun his musical career when he found himself a nickel short of a beer at the Maple Leaf Hotel in Timmins, Ontario, in 1964 at age 28. The bartender agreed to give him a drink if he would play a few songs, and that turned into a 14-month contract to play at the hotel. Three years later, Connors made his first album and garnered his first hit in 1970 with "Bud The Spud."

Hundreds more songs followed, many based on actual events, people and towns he had visited.

He was appointed to the Order of Canada in 1996, one of the country's highest honors. He also had his own postage stamp.

A celebration of Stompin' Tom's life is being planned for next Wednesday at the Peterborough Memorial Centre.