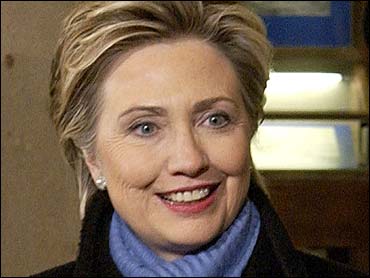 "Stopping Hillary Rodham Clinton is the most important thing you and I can do as Republicans in the next two years," says the fund-raising appeal sent out by Stephen Minarik. "You could say it's our duty as Republicans."

While Minarik has sent out similar missives to New York Republicans, Friday's appeal — a copy of which was obtained by The Associated Press — is his first to the potentially more lucrative national anti-Clinton audience.

Clinton, who has said she is not looking beyond her Senate re-election effort, has countered with fund-raising appeals of her own, including a March 31 e-mail warning supporters she is "the No. 1 target for the right-wing attack machine."

Spokeswoman Ann Lewis said Sunday that the Clinton campaign was "not surprised that the Republican Party has chosen to wage a personally negative campaign. They don't want to talk about Hillary's record of working for New Yorkers, throughout the state and in the Senate."

In his four-page letter, Minarik refers to Clinton six times as a "radical liberal" or "ultraliberal," and says she is the "darling of the wealthy liberal left — especially the Hollywood left" and has a "vast network of far-left contributors."

Complicating Minarik's anti-Clinton effort is the fact that the state party has yet to come up with a big-name challenger to take her on in 2006. Minarik's mentor, Gov. George Pataki, has said he has no interest in being a senator and former New York City Mayor Rudolph Giuliani's top political aide said Giuliani is too busy with business interests to run for office next year. Both men are considered potential 2008 presidential candidates.

On Saturday, Clinton was in Minnesota, raising money for her re-election campaign at a $1,000-a-person private event and headlining a $100-a-person dinner for Minnesota's Democratic-Farmer-Labor Party.

Many attending the dinner said they wanted the former first lady to run for president in 2008.

"I like her. I am absolutely for her," said Minnesota state Attorney General Mike Hatch.