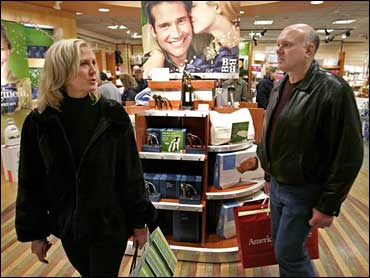 Retailers can blame the calendar. They can blame the weather. They can even try to blame New York City's transit strike. But in the end the 2005 shopping season may just be another case of merchants not giving shoppers what they really want — must-have items at reasonable prices.

Without white-hot apparel products or toys to lure people to the nation's malls and stores, many shoppers have opted to hold off until the final hours before Christmas, or until the post-Christmas sales to open wide their wallets. Consumers even have taken the easy way out by buying the procrastinator's savior: gift-cards.

"More Americans are waiting to the end to shop for Christmas than any other time in the last 10 years," said C. Britt Beemer, chairman of America's Research Group, based in Charleston, S.C. "The consumer was never excited about anything that they saw this Christmas."

A quirky calendar hasn't helped. Hanukkah, which begins Dec. 25, is falling late, and Christmas Eve is on a Saturday, letting shoppers wait even longer than last year and creating more angst for the nation's stores. Merchants with a big presence in New York City, such as Saks Inc. and Bloomingdale's and Macy's parent, Federated Department Stores Inc., were hit by a three-day transit strike that left commuters too exhausted to shop.

Higher heating fuel and gasoline costs have added to consumers' burdens, even though unemployment is relatively low and personal income has been rising.

John Waszczak, a sales manager at Best Buy's store in Duluth, Ga., said that "small LCD televisions and portable DVD players have sold out the most."

Online retailers also have enjoyed a robust holiday season, with non-travel online spending up 24 percent, according to comScore Networks Inc., an Internet research company. Online merchants saw a surge late in the season, with sales soaring 29 percent for the week ended Dec. 18 compared to the same period a year ago.

For many other retailers, particularly apparel stores, the season has become a game of brinkmanship between savvy consumers who have learned they may get better deals if they wait long enough and merchants who are trying to maximize profits.

According to a survey of 1,000 shoppers conducted by the International Council of Shopping Centers, only 26 percent of households completed their holiday shopping as of Dec. 18, compared to 31 percent during the same time a year ago.

"I've been busy. I haven't had the time," said Karen Townsend of Dayton, Ohio, who was at the local Dayton Mall earlier this week, and had 30 gifts to buy. "This is not typical for me. I've been traveling on business and just involved in other things."

But Townsend's procrastination paid off when she found deals like 40 percent off sweaters at Limited Brands' Express store. "I'm thinking maybe this is a way to go," she said.

Other consumers were disappointed at the lack of pre-Christmas discounts, however.

"We were kind of waiting for the deals, but we're not really seeing any," said Tammy Krieger of Prior Lake, Minn., who was at the Mall of America in Bloomington, Minn. on Wednesday.

Retailers — both online and on land — worked hard to jump-start the season a few weeks earlier than a year ago with enticing discounts, free shipping deals and advertising campaigns, although most retailers haven't reacted with a frenzy of bargains beyond what was in their strategy.

"This year, it is more about stores' trying to manage their business, their inventories and markdowns," said Marshal Cohen, chief analyst at NPD Group Inc., a market research firm based in Port Washington, N.Y. "They're also recognizing a second holiday season, which begins Dec. 26."

Michael P. Niemira, chief economist at the International Council of Shopping Centers, says the final hours before Christmas and next week will be "big." He believes that merchants will still wind up with a modest 3 percent to 3.5 percent increase for the November-December period.

The estimate is based on same-store sales, which are sales at stores opened at least a year. But Niemira added that if more shoppers than expected redeem their gift cards next week, that could boost December sales by 0.75 percentage point.

Stores such as KB Toys Inc. and Coach Inc. will be showcasing some new merchandise after Christmas for shoppers who will redeem their gift cards or plan to spend on themselves. Gift card sales — expected to rise 6.6 percent this season, according to the National Retail Federation — are only recorded when shoppers redeem them, leaving some hope that retailers can preserve profits this year.

Christmas Eve — normally a time when shoppers focus on family celebrations — could be the real wild card this year. The urge to put more under the Christmas tree may overcome the desire to get a bargain.

"I'll probably be here Christmas Eve," said Teresa Lagunas of Los Angeles, who was at the local Burbank Town Center mall on Thursday.

Don't expect Townsend in the Dayton Mall on Saturday, however.

"I refuse to shop on Christmas Eve. But that's when my husband starts," she said.