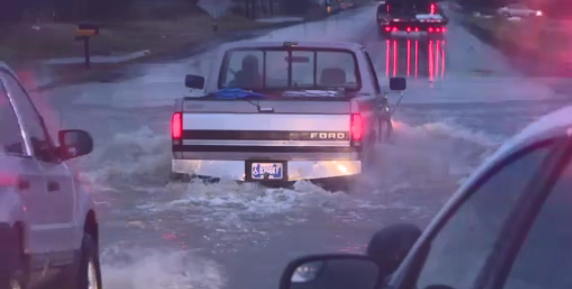 CHICAGO -- A storm system stretching from Texas to the Great Lakes states with risks of flooding, freezing rain and snow is causing fatal accidents and forcing schools to close.The National Weather Service issued winter weather advisories Tuesday for parts of Oklahoma, Kansas, Missouri, Iowa, Minnesota, North Dakota and Wisconsin. Flood warnings were in effect in Illinois, Indiana and Michigan with flood watches in Texas and Arkansas.

In Minnesota, state police say winter weather has contributed to 400 crashes and 250 spinouts, including two fatal accidents. As much as a half-foot of snow is expected in some areas. Arkansas weather service forecasters say some areas could see 8 inches or more of rain this week.

Freezing rain and ice fell in parts of Kansas Tuesday, causing issues for flights. According to CBS affiliate KCTV, the Kansas City International Airport has been treated with deicing chemicals. But due to the forecasted winter conditions, travelers have already seen delays and cancellations.

According to CBS Chicago, officials in northwest Indiana are monitoring the Little Calumet River, which could reach levels not seen in a decade by Wednesday morning. As of 10 a.m. Tuesday, the river measured 14 feet, about two feet above the flood stage. Forecasts show it could reach more than 15 feet before it begins to recede.