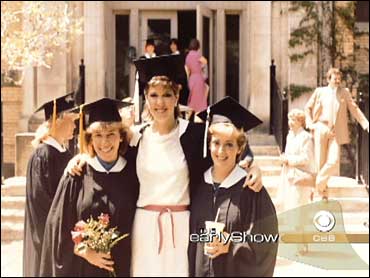 For many of its graduates, such as The Early Show co-anchor Hannah Storm, Notre Dame is not just a college, it's a community that is never left behind.

In Storm's new book, "Notre Dame Inspirations," many of the school's prominent alumni share their campus memories and stories of success. From TV legends to All-American athletes to honorable politicians, they tell how their experiences at Notre Dame served as an inspiration for success. More than 30 famous grads shared their tales, including Joe Montana and Regis Philbin. In fact, Storm says they are so many young, distinguished Notre Dame alumni that they are already planning a second book.

"These people we know are really famous and successful, but I was interested in them in what happened during their college years," Storm said. "I was curious if their experiences were like mine during their four years and what it was that they took away from the school."

Storm recently visited the university in South Bend, Ind., and got the chance to catch up with some former students on campus.

Before The Early Show, Storm was a prominent network sports anchor and her book is about football, spirituality, life and everything else under the dome.

"People we know now as successful went through a lot of failure," Storm said. "Regis Philbin tells his story how he was turned down as a morning show host at a Chicago station. Joe Montana talks about all his game winning plays that were all preceded by bonehead plays. One of the things Phil Donahue talks about in the book, is that don't just kneel down and pray, stand up and do it, and I love that."

Storm says you don't have to be part of the Irish faithful to enjoy this book. The inspiring stories inside can appeal to everyone.

"So many people I interviewed were nose to the grindstone types, they said I'm not fabulously talented, but I just worked harder than anybody else. I think that's a good message for everyone to hear," she said.