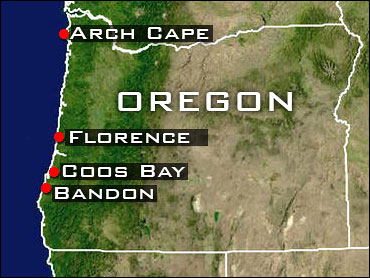 Storms that lashed the scenic coast of Oregon this winter have dredged up an unusual array of once-buried secrets: old shipwrecks, historic cannons, ghost forests - even strangely shaped iron deposits.

One of the first ships to emerge from the sands was recently identified as the George L. Olson, which hauled lumber until it ran aground at Coos Bay's North Jetty on June 23, 1944.

The shipwreck has become a tourist attraction on the southern Oregon coast. Interest became so great that authorities had to reroute traffic around the ship and post signs warning visitors to leave it alone because it is now an archaeological site.

The curiosities began showing up after December when Pacific storms pummeled the state, damaging thousands of homes and causing an estimated $60 million in damage to roads, bridges and public buildings.

Hardest hit was Vernonia, a town of about 2,400 people, where floodwaters damaged about 300 homes, ruined schools and temporarily closed businesses.

The storms also brought high seas, which caused beach erosion. Although sands commonly shift in winter, this season appeared especially dramatic. There were reports that up to 17 feet of sand eroded away at Arch Cape.

Other shipwrecks have emerged recently - a wooden ship near Bandon, also on the southern coast, and another where the Siuslaw River flows into the ocean near Florence. Little is known about either ship and sands have reclaimed the Siuslaw wreck.

Ships aren't the only things surfacing on the coast.

Ghost forests are groves of tree stumps, some an estimated 4,000 years old, that were engulfed by the sea. Because of shifting sands, many have suddenly popped up.

The stumps are especially impressive at Arch Cape, where locals say they haven't seen them for some 40 years, according to Tiffany Boothe of the Seaside Aquarium.

"The forest floor is actually uncovered too. You can see the floor," she said. "There's like these mud cliffs. As your walking on it, it resembles clay. It's definitely not sand at all."

Arch Cape also was where a pair of historic cannons were recently discovered by beachcombers. The origin of the cannons, each weighing between 800 and 1,000 pounds, is not known.

State archaeologist Dennis Griffin supervised the removal of the cannons, which were placed in tanks of fresh water and burlap for preservation.

The Oregon Parks and Recreation Department does not yet know what they will do with the cannons. They possibly came from the USS Shark, a survey ship that wrecked in 1846 off the Columbia River Bar.

Strangely shaped deposits of iron - called "red towers" - have also emerged from beneath the sand. The orangy-red lumps, most no more than 3-feet tall, are usually buried deep beneath the sand but now dot the coastal landscape.

"These formations could be gone in the next week. That's how fast the coast changes," Boothe said.