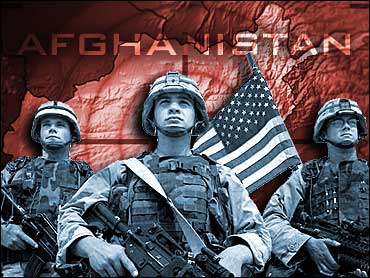 ; U.S. soldiers will be screened for psychological problems before they leave Afghanistan and commanders will watch out for symptoms of depression and anxiety among their troops, the military announced Thursday in a new focus on mental health.

"We're deeply concerned ... and are moving ahead to try to screen people better who are going home and provide them with the services they need once they get there," said Col. Thomas Hicklin, chief of the unit in Afghanistan that deals with stress disorders among troops.

Concern over the mental health of soldiers fighting the war against terrorism rose after the wives of three soldiers who had served in Afghanistan were killed this summer at Fort Bragg, N.C. — allegedly by their husbands, two of whom then committed suicide.

Soldiers from Fort Bragg, the headquarters of the 82nd Airborne Division and the U.S. Army's John F. Kennedy Special Warfare Center and School, have featured prominently in ground operations in Afghanistan.

Two of the three implicated were members of the Special Forces and the other reportedly a member of the secret Delta Force.

Frank Ochberg, a former associate director of the National Institute of Mental Health and an expert on post-traumatic stress, said studies have shown no strong correlation between the disorder and domestic violence.

"Far more often domestic assault has to do with bullying, jealousy, desire to control a spouse," he said in a phone interview from Okemos, Mich.

The war in Afghanistan has claimed relatively few American lives. Sixteen Americans have been killed in combat or hostile situations since it began Oct. 7, compared with 148 battle deaths suffered by U.S. forces in the Gulf War, which lasted about six weeks.

But the war has been more challenging in other regards, such as the difficult terrain, inhospitable climate and stubborn and elusive enemy.

"This is a war zone," said Hicklin, a reservist who is an assistant professor of psychiatry at the University of Southern California School of Medicine.

"It's a stressful environment. It's hot, dusty and difficult to live in. And every day it's kind of a surprise for the soldiers out there, what they can run into in terms of an ambush or a near ambush."

Sgt. Brad, a U.S. Army Special Forces soldier who asked to be identified by only his first name, has been in two firefights since he came to Afghanistan in April.

The first was in May, when he was shot at from just 10 feet away. He was not hit but another American soldier was killed in the ensuing gunfight.

Barely a month later, Sgt. Brad and about 20 other soldiers were ambushed. He said the Americans killed 30 to 35 of the enemy in the course of that combat.

The sergeant, who as an elite soldier receives training to cope with stress, said he didn't feel the need for professional counseling. It was enough, he said, for him to talk through the events with members of his special forces team.

"My team is like a second family," Brad said. "They're like my brothers. If I can't tell them everything, it does us no good."

Even soldiers who don't experience combat can suffer from "homefront stress," Hicklin said. He said financial problems, missed birthdays, marital difficulties, and the illness or death of loved ones can be magnified when a soldier is in the field.

"You've got your family to worry about, your kids, what's going on back there. Are the bills getting paid?" said Sgt. Brad, who makes two short phone calls home each week and only gets mail every four weeks at his outpost. "With all that distance, you may not know exactly what's going on."

Last week, the Army sent a team of health specialists to Fort Bragg to study a range of possible explanations for the killings there, including how the Army prepares soldiers and their families to deal with personal and other problems before and after an overseas deployment.

The Army is also looking into the possible side effects of anti-malaria medication taken by troops in Afghanistan as a possible contributing factor.

The military has not yet determined whether the killings were related to duty in Afghanistan. The wife of a fourth soldier based in Fort Bragg but who did not serve in Afghanistan was also killed this summer, again allegedly by her husband.

Still, Hicklin said, the series of killings at Fort Bragg have made the military "very much more aware" of how dangerous a family crisis can be and of the need to address problems before the soldier leaves Afghanistan.

"We are alerting the commanders to send people to see us if they have homefront problems, rather than just sending them home," Hicklin said.

As part of a routine physical soldiers undergo before returning home, the military is now including a mental health checklist "to see if they have problems with hostility, combat stress, sleeping and other issues; if they're depressed, if they're anxious," Hicklin said.

Previously, soldiers did not receive psychological screening and would only be referred to the base psychiatrists if a problem became readily apparent during the physicals.

Hicklin said it was important for families to make things easier on the soldier in the field.

"Resist getting in fights, family conflicts, making huge family changes while the soldier is deployed in a hostile fire zone. That's really difficult for the soldiers to deal with," Hicklin said. "Some issues can be postponed, if not avoided."