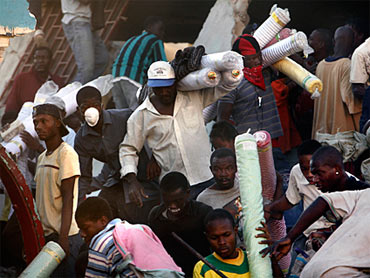 Searchers trying to free survivors believed trapped under the Montana hotel withdrew from the mountain of rubble when the tremor hit Saturday morning. But they were back at it five minutes later, trying to reach voices they believe they have heard beneath the rubble.

The U.S. Geological Survey says the aftershock was measured at magnitude-4.5.

USGS geophysicist Paul Caruso says the new tremor did not appear strong enough to cause much damage, but says even a small quake could bring down buildings hurt by Tuesday's magnitude 7.0 quake.

How to Help Victims
"Family Links" Web site for the Missing
Complete Coverage: Devastation in Haiti

A flood of food, water and U.S. troops flowed toward Haiti on Saturday as donors squabbled over how to reach hungry, haggard earthquake survivors still trying to claw others from ruined buildings before the dying became the dead.

Haiti's government alone has already recovered 20,000 bodies - not counting those recovered by independent agencies or relatives themselves, Prime Minister Jean-Max Bellerive told The Associated Press. He said a final toll of 100,000 dead would "seem to be the minimum."