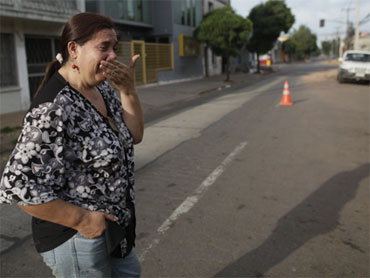 The most powerful aftershock in six days sent terrified Chileans fleeing into quake-shattered streets and forced doctors to evacuate some patients from a major hospital on Friday as the nation struggled to comprehend the scope of the disaster that hit it.

People raced into the streets in pajamas as a magnitude-6.0 aftershock struck Concepcion shortly before dawn.

It was the strongest aftershock since a magnitude-6.9 jolt shortly after Saturday's historic quake and it sent office chairs spilling from upper floor of an already-damaged 22-story building.

Fear of additional damage led officials to evacuate some patients from the regional hospital in downtown Concepcion.

"They sent us all home," said 47-year-old Aaron Valenzuela, who hobbled through the street because four toes had been amputated due to an injury he suffered in Saturday's big quake.

Dr. Patricia Correa, who was overseeing the hospital's emergency ward, said her part of the five-story building "is on the point of collapsing. The walls cracked."

As a daily curfew meant to halt looting expired at noon, people flooded into the streets of Concepcion and formed lines about 100 long behind an intermittently functioning automatic teller machine, for a rare open pharmacy and at a corner store.

A sign at the shop announced it was out of flour, water, candles, rice, cheese, eggs and diapers, though jam, sugar, coffee and onions remained.

"The Chilean government is asking for international aid and we will give it," he said.

Amir Dossal, executive director of the U.N. Office for Partnerships, said private donations have begun to arrive, among them $1 million from Wal-Mart and $500,000 from Hewlett Packard.

President Michelle Bachelet, meanwhile, met with her successor, Sebastian Pinera, and they promised to try to avoid letting the March 11 hand-over of power interrupt aid efforts.

"The new government will have an immense challenge," Bachelet said.

Officials were still struggling to determine the human toll of the magnitude-8.8 quake, as well as the damage to roads, ports and buildings such as hospitals.

Disaster officials announced they had double-counted at least 271 missing as dead in the hardest-hit part of the country - an error that would drop the official death toll to about 540 if there were no other mistakes.

But Interior Department officials said that from now on, they would release only the number of dead who had been identified: 279 as of Friday.

The government also said Friday it had removed Cmdr. Mariano Rojas as head of the Navy's oceanographic service over its failure to issue a tsunami warning for the Pacific immediately after Saturday's quake.

Port captains in several towns issued their own warnings, but a national alert never came, and some say that failure led to deaths. The tsunami is believed responsible for much of the deaths and damage.

Bachelet says it will take three years to rebuild the region wracked by the earthquake and tsunami, and that task is all too clear to the people trying to clean up the ruins of their towns.

In the tourist town of Dichato, a few kilometers (miles) north up the coast from Concepcion, the quake and tsunami killed at least 19 people and smashed neat wooden houses and small hotels into huge piles of splinters.

The town of 4,000 people stank Thursday of decomposing fish and a fishing boat marooned far inland was full of rotting octopus.

Bachelet's government had made a difference in the town before the quake, building 130 neat mustard-yellow duplexes in a public housing project that opened in September and providing 60 million pesos - $120,000 - to restore the facades of businesses along main street, said Mabel Gomez, president of the local chamber of commerce.

But as they rooted through the ruins, Dichato's residents said they are pinning their hopes for renewal on the next president, a conservative billionaire.

"I think he has the ability to do it," said Luis Omar Cid Jara, 66, whose bakery and roast chicken shop were destroyed.

Pinera, who takes office March 11, named new governors for the six hardest-hit regions and told them to get to work even before his inauguration. His immediate priorities: Find the missing; ensure law and order; restore utilities; and tend to the injured.

Pinera also stepped up his criticism of Bachelet's administration on Thursday, knocking "the lack of coordination and the weaknesses that this tragedy has uncovered with brutal eloquence."

Top military officers had complained they couldn't deploy troops to quash looting or deliver aid until Bachelet finally declared a state of emergency more than 24 hours after the temblor.

The magnitude-8.8 quake - one of the strongest on record - and the tsunami that followed ravaged a 700-kilometer (435-mile) stretch of Chile's Pacific coast.

In the coastal town of Constitucion, firefighters were looking for bodies of people swept away by the tsunami as they camped on Isla Orrego, an island in the mouth of the Maure River that flows through the city.

Constitucion suffered perhaps the greatest loss of life in the disaster, in part because many people had come for carnival celebrations and were caught in huge waves that reached the central plaza.

"There were about 200 people in tents who disappeared" on Isla Orrego, Fire Chief Miguel Reyes told The Associated Press. An AP Television News crew witnessed several bodies being recovered, including that of a baby girl washed up on the beach.