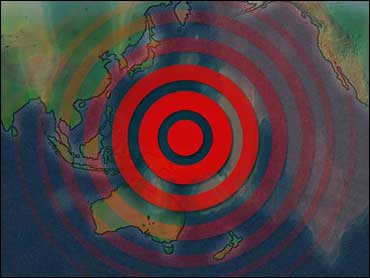 The Japan Meteorological Agency says a quake with preliminary magnitude of 7.4 has occurred near New Zealand at around 2:24 p.m. in Japan, but preliminary reports suggested the quake was too far offshore to be felt.

The agency said in a statement that there may be chance of tsunami near the epicentre.

A spokesman for Geoscience Australia said seismologists were not expecting any damage given the distance offshore.

Volcanic arcs and oceanic trenches partly encircling the Pacific Basin form the so-called Ring of Fire, a zone of frequent earthquakes and volcanic eruptions and the location of the top 10 earthquakes in the world since 1900. All of the top 10 measured an 8.5 magnitude or above.

Several hours earlier on Sunday, a strong earthquake swayed buildings on the Pacific island of Guam. No injuries, damage or tsunami were immediately reported.

The U.S. Geological Survey reported the quake magnitude at 6.8 and said it occurred about 215 miles south-southeast of the U.S. territory of Guam. It had a depth of about 6.2 miles beneath the sea floor, according to the USGS.

The Japan Meteorological Agency did not issue an official tsunami warning, but said there may be a chance of one near the epicenter. However, an official from the Pacific Tsunami Warning Center, or PTWC in Honolulu, Hawaii, said the quake probably did not create a tsunami, and the center had not received any reports of one.

"It's very unlikely any destructive tsunami was created by this earthquake," said PTWC's assistant director, Stuart Weinstein. "It would have reached Guam by now."

"We haven't received any reports of tsunami activity in Guam," he said.

The earthquake was in an isolated part of the Pacific where they don't usually occur, according to Weinstein. It was probably felt in Guam as well as in Saipan, which is part of the U.S. commonwealth of the Northern Mariana Islands, Weinstein said. It's also possible it was felt in parts of Micronesia.

The combined population of Guam and Saipan is about 225,000.

"It was probably too far away from populated areas to cause much damage," Weinstein said.

The Japanese agency has not received any reports of damage or tsunami, agency official Nobuo Fukuda said.