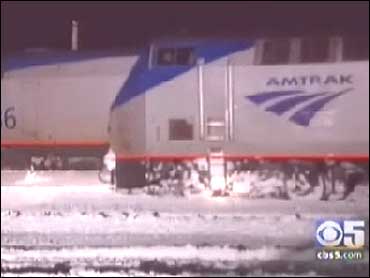 An Amtrak spokeswoman says the train that had to stay parked overnight on snowy tracks high in the Sierra Nevada is chugging along again en route to Chicago.

Two trains and about 400 had passengers were initially stranded Friday night after a large snow plow fell through a trestle and onto the tracks, blocking the rail.

One San Francisco area-bound train was pulled to Reno and its 165 passengers were put up in a hotel or bused to their destinations, Amtrak spokeswoman Karina Romero said.

The other train, which was headed from the Bay Area to Chicago, remained in the mountains. About 60 people were taken by bus back to the San Francisco Bay area overnight and 155 chose to stay on the heated train and sleep either in their seats or in reserved sleeping cars.

Romero said the train had heating and lights and passengers were given food. No injuries had been reported.

The tracks were cleared early Saturday and the train got going again just before 8 a.m. The passengers are scheduled to arrive in Chicago Monday morning, about 16 hours behind schedule.

A Union Pacific spokeswoman, Zoe Richmond, confirmed that the company's equipment had blocked the tracks but had no other information on the incident. She said the West Coast's stormy weather has hammered Union Pacific's tracks so far in 2008.

Crews in Oregon have been working for two weeks to clear a mudslide that dumped up to 20 feet of mud and rocks on tracks used by an Amtrak line to shuttle passengers between Los Angeles and Seattle, Richmond said. Service on that line has been halted since the mudslide, she said.

"The start of the year has just been plagued with weather-related issues," Richmond said.